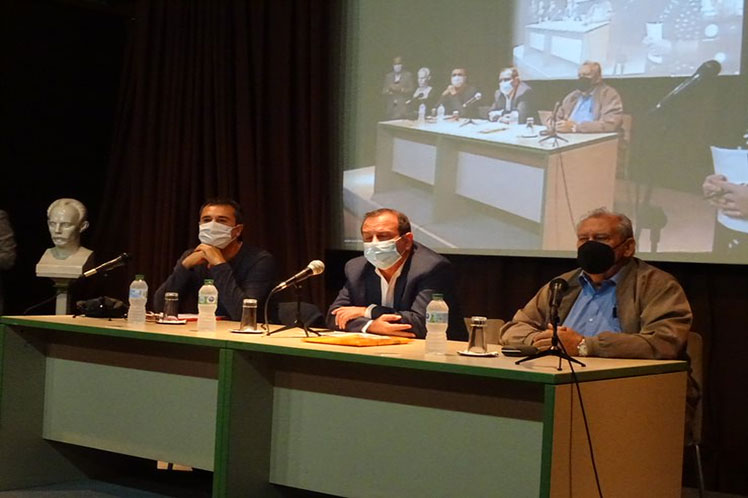 Madrid, Sep 25 (Prensa Latina) Fernando Gonzalez Llort, president of the Cuban Institute of Friendship with the Peoples (ICAP), has had a busy agenda with solidarity groups in Spain.

Representatives of the State Cuba Solidarity (MESC) in Spain took the opportunity to express their sincere condolences to Gonzalez Llort on the recent death of his mother, Magali Llort.

They dedicated special words to Magali Llort for her tireless battle for the release of the Cuban Five, as the five Cuban antiterrorist fighters, including Fernando, were known internationally.

During the meeting, Jose Manzaneda, coordinator of Cubainformacion and one of the leaders of the MESC, highlighted the progress made by the Movement that brings together 54 groups from all over Spain.

He mentioned the caravans and marches held in May and June in more than 10 Spanish cities to condemn Washington’s over 60-year blockade against Cuba, and the events for the Day of National Rebelliousness on July 26 in a dozen cities.

He particularly highlighted the SODEPAZ association that led the campaign to raise funds to purchase more than four million syringes for Cuba.

In his speech, the ICAP president expressed gratitude for the expressions of affection he has received, and praised the values of solidarity at a very difficult time for his country.

Gonzalez Llort, who is a Hero of the Republic of Cuba and a legislator at the National People’s Power Assembly, underlined the importance of unity, as it can be seen in the actions undertaken by the MESC.

It has shown that it is transcendental, for that spirit of unity that allowed Fidel (Castro) to unite all forces to achieve the victory of the Revolution, Gonzalez Llort said.

Gonzalez Llort admitted that Cuba is going through a complex situation, due to the crisis caused by Covid-19, the tightening of coercive measures by the United States, and the paralysis of tourism, one of the main sources of income for the economy.

However, he emphasized the determination not to be defeated by difficulties and to resist firmly and creatively to win these new challenges of the Revolution.