Syria and Jordan agreed to promote cooperation in various fields 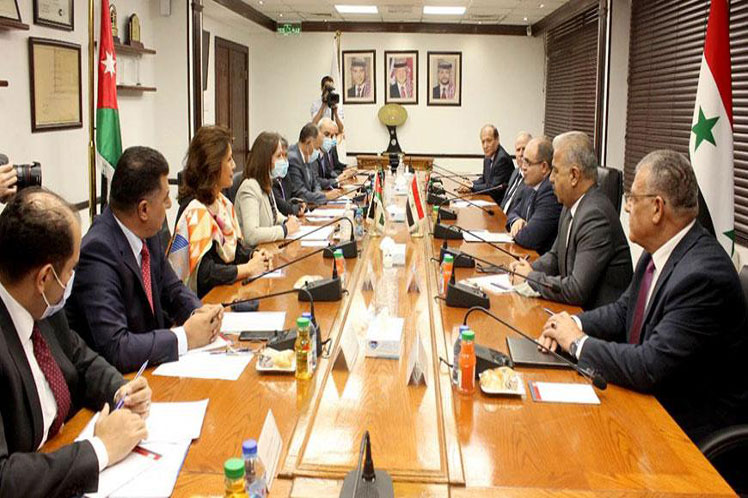 Syria and Jordan agreed to promote cooperation in various fields

The high officials held talks for two days in Amman, the capital of the neighboring country, on working mechanisms and common visions and understandings, in addition to plans to increase cooperation in the fields of trade, energy, agriculture, water and transport; official Syrian agency SANA reported.

According to the media, the ministers highlighted the importance of developing a vision to solve difficulties caused by the flow of people and the commercial exchange, and to promote the association in the fields of energy, water and agriculture.

Regarding transportation, it was agreed to facilitate the flow of goods and passengers between the two countries, and it was announced that the Royal Jordanian Airlines will restore flights between Damascus and Amman, starting next Sunday.

They also discussed ways to restart the Jordanian-Syrian electrical link line and the need to develop a road map to rehabilitate the damaged electrical network on the Syrian side.

In turn, Jordanian Prime Minister, Bishr al-Khasawneh, stressed during a meeting with the Syrian ministerial delegation that the recent meetings and mutual visits between the two countries should take the form of projects that benefit the two brother peoples and help strengthen historical and fraternal ties.

The chief executive wished for greater security and stability for Syria and discussed with the delegation the possibility of accelerating the rate of transfer of Egyptian gas and electricity to Lebanon via Jordan and Syria.

Syrian ministers, in turn, stated that the Syrian people welcome the recovery of relations between the two brother countries.

Russia, Iran and Turkey to help in fight against terrorism in Syria

Russia, Iran and Turkey to help in fight against terrorism in Syria