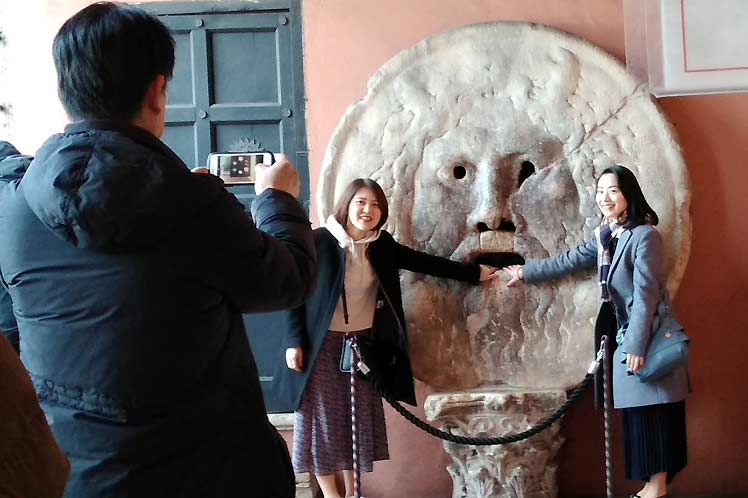 Rome, (Prensa Latina) Tourists make long lines to insert a hand into the BoccadellaVerità, an image of a face with an open mouth carved into the wall of an old Roman temple, where it was once used as a sort of medieval lie detector.
Share on facebook
Share on twitter
Share on whatsapp
Share on telegram
Share on email

The legendary sculpture is located at the Santa Maria church in Cosmedin, on the banks of the Tiber River, very close to the Palatine Bridge, the Massimo circus, the Roman Forum and the Coliseum.

The Mouth of Truth was mentioned as early as 1485 and was placed where it is today in 1631 at the request of Pope Urban VIII (1623- 1644). Wonders of the city of Rome, a medieval text written in Latin as a guide for pilgrims and tourists, describes: ‘Next to the Santa Maria della Fontana Church is the Faun’s Temple. This image spoke to Julian, the emperor known as The Apostate which deceived him.’

It is a disc-shaped face of 1.75 meters in diameter and 1300 kilograms in weight, with pierced eyes, nostrils and mouth. It is not known what it was originally used for and who made it.

Throughout the years, the image has been attributed to Jupiter, the God of the Ocean, an oracle or a divinity of ancient Rome. Some versions say that its initial use was the cover of a drain of an undefeated Temple of Hercules, which had an eye similar to that of the Pantheon.

Its fame is granted by a legend of the Middle Ages, which holds that the mouth orifice was used in trials against those accused of perjury or adultery, who to prove their truth had to put their hand in their mouth. But, faced with a proven crime, someone behind the mask was prepared to cut off the liar’s limb.

The BoccadellaVerità always appears in connection with the film Roman Holiday (1953). In that movie, Gregory Peck manages to surprise his partner Audrey Hepburn by showing her that his hand was missing.

Actually, it was a scene out of the script and something that the actor came up with during the shooting of the film, in which Hepburn had her first starring role, which earned her an Oscar for best actress. At the same time, the film won the award for the most outstanding original screenplay.

Because of its fame as a must-see site in Rome, its uniqueness or even the mysticism that surrounds it, there are few visitors to this ancient city who do not try to place their hand in the Mouth of Truth. But more than that, everyone wants to have a photo that ‘proves’ that they came out unharmed from the oldest lie detector in history.