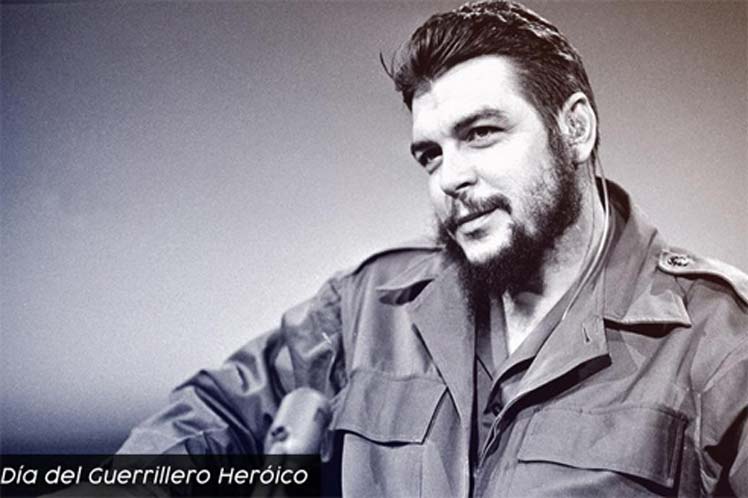 ‘To talk about such a colossal figure as Che is always difficult because everything has been said about him, what else can we add? But the basic teaching that his political and revolutionary actions leave us is the attitude of solidarity, of opening up to others and taking them as equals, as fellow men,’ Colussi defined, on commemorating one more year of his physical disappearance.

‘To work not with an economic, commercial, utilitarian purpose, as capitalism seeks, but for the sake of the other, that is the basic teaching in Cuba, Latin America and the world,’ Colussi noted who is also an Argentinean, a university professor headquatered in Guatemala.

‘It is important to take up again today Che’s example, his model, an icon of what a revolutionary should be, especially at a time when the model of the Socialist Revolution is a little adrift, paralyzed, which does not mean that its ideals are forgotten, he ensured.

For Colussi, today more than ever it is necessary to vindicate the idea of social and revolutionary transformation of society defended by Che, especially when in recent decades the neoliberal system tries to silence protest at all costs or stigmatize it.

In such difficult context for global movements and especially for youngsters, his figure emerges as an icon of Revolution, of solidarity, of selfless struggle for a different world, for the new man he proposed, he assured.

‘It is the force that must continue inspiring those of us who continue thinking of the imperious need for a revolutionary change, not a cosmetic one, as the system can afford,’ he said during his intervention in the virtual forum ‘Che’s Thought and its Validity,’ arranged here by the Manuel Galich Cuba Solidarity collective.

In his opinion, the teachings of Guevara who gave his life with passion, dedication, with audacity, are still present; therefore, it is impossible for his example of life and action to disappear.

‘Che’s message, he explained, must retake that fighting spirit because changes do not come from thin air, they are not made by chance. Capitalism is a piece of crap but alone it will not fall, it must be made to fall, and the figure of Che and his message help achieve so, we must make to happen,’ he concluded.

The consul of Cuba’s Embassy in Guatemala, Malena Castañeda, also intervened on the facebook live, who recognized the example of the Argentinean doctor in the contingent of healthcare professionals that selflessly take health to many countries in the world, particularly in the land of the Quetzal, where they will celebrate 23 years of uninterrupted work next November.