Jill Biden, five years after walking the streets of Cuba 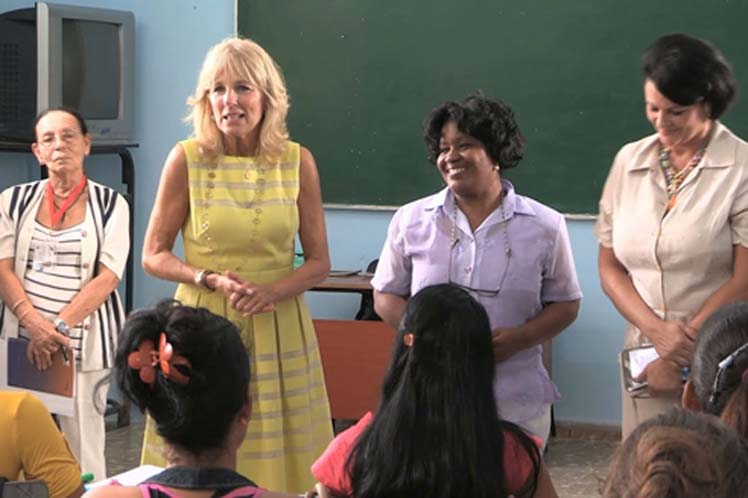 Jill Biden, five years after walking the streets of Cuba

Between camera flashes, walks through the colonial downtown of this capital, galleries, artistic shows and other activities in the central city of Camagüey, so was the agenda of the wife of former US vice president and current president, Joe Biden.

During the official visit, between October 6 and 9, 2016, the academic exchanged with government officials, entrepreneurs and prominent women in the sectors of education, health and the scientific-research activity.

The agenda of the teacher, Ph.D. in Pedagogy, also made room to attend a friendly soccer game between a US and Cuba teams, an emblematic match for being the first of its kind since 1947.

The process of normalization of diplomatic relations started in December 2014 under the government of Barack Obama (2009-2017) and Joe Biden, would just depend of a stroke of pen from President Donald Trump (2017-2021), to a supposed point of no return.

In June 2017, the New York tycoon signed a memorandum that repealed the directive of his predecessor and suppressed most advances in relations with Havana.

‘I am annulling the entire bilateral agreement of the last government. I am announcing a new policy, as I promised during the campaign’, Trump said, and announced restrictions on operations in foreign currency to the Caribbean Island and a strict application of the economic blockade.

More than 240 coercive measures strangling the Cuban people are listed as the legacy of the 45th occupant of the Oval Office, as part of a policy that Joe Biden, in his days of presidential campaign, promised to review.

Trump’s list against Cuba includes limitations on travel to US citizens, obstacles to foreign trade, exports and the sending of remittances, as well as discrediting campaigns and the suspension of flights to Cuban airports, with the exception of Havana’s.

Under the pretext of health incidents reported by US diplomats here, for which science has not found any cause and reports from the US State Department reveal government mismanagement, consular services in the Caribbean capital were closed.

The decision influenced the suspension of the family reunification program and the granting of visas for visits and orderly and safe migration, since Cubans are bound to travel to third countries for all the procedures, increasing the expenses without certainty of approval.

The inclusion of Cuba in the list of States that supposedly sponsor terrorism was one of the last measures and, perhaps, the most symbolic, because the current administration, despite promises to return to the path before June 2017, has not removed it, like none of Trump’s other provisions. On the contrary, Biden kept the island listed as part of the nations that are allegedly uncooperative with Washington’s efforts in the area of terrorism, and while ‘reviewing’ policy toward the neighbor, which he says is not a priority, he is requesting millions of dollars for subversion programs.

As deputy director for the United States in the Cuban Foreign Ministry, Johana Tablada wrote on Twitter, that country’s policy towards the Island ‘has nothing to do with the aspirations of most Cubans and US citizens’.

‘It responds entirely to the irrational political polarization of the United States and to pressure from electoral interests in Florida that profit from the policy against Cuba’, she said.

Currently, as popular newscast program on Cuban television recalls Jill Biden’s footsteps on the cobblestones of this city, the question still remains as to whether, in private, she tells her husband about her days in the Caribbean island.

Even more interesting it becomes if, along with the demands of activists, organizations and countries for the stop of unilateral pressure on Cuba, it can contribute to the resumption of the thaw.