Peace Prize of the Peoples awarded to Cuban Medical Contingent 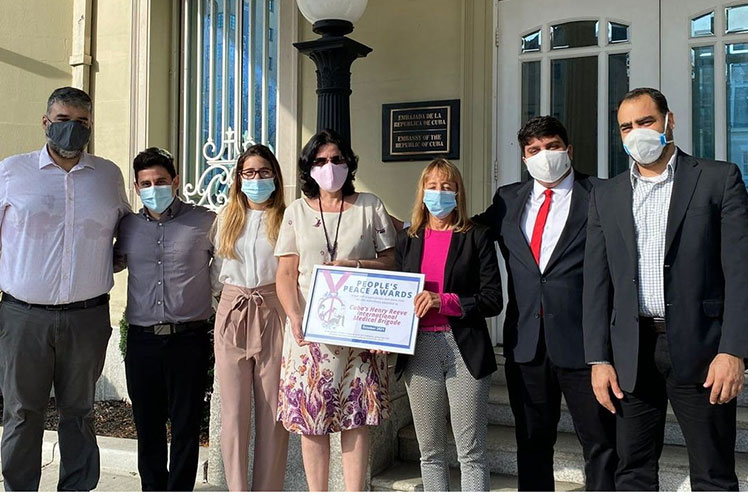 Peace Prize of the Peoples awarded to Cuban Medical Contingent

‘During this Covid-19 pandemic, we were very inspired to see how the medical personnel of a small island under a criminal blockade risked their own lives to save others in different countries throughout the world’, said Medea Benjamin, co-founder of the pacifist organization Code Pink.

The activist regretted the Henry Reeve group was not recognized by the Nobel Prize Committee and that is why we decided to give them the People’s Peace Awards, which highlights ‘the incredible solidarity, humanism and values ​​that they demonstrated for so many years.’

The Contingent of Doctors Specialized in Disaster Situations and Serious Epidemics was created on September 19, 2005 in Havana, at the initiative of the historical leader of the Cuban Revolution, Fidel Castro, who then affirmed it could be demonstrated how to respond to tragedies of the planet.

‘We will show that human beings can and should be better. We demonstrate the value of conscience and ethics. We offer life’, he said.

The first emergency it faced a few days after its creation was in Guatemala, where it assisted the population affected by the floods that occurred there in October 2005 and also during the earthquake in Pakistan.

Cuba was one of the first countries in the world to respond to the call of the World Health Organization (WHO) and the United Nations Organization to confront the Ebola epidemic in Africa in 2014 and in 2010 they assisted those affected by the devastating earthquake in Haiti.

For its relevant career, the Contingent -which honors the American fighter who fell in the Cuban war for independence -received in 2017 the Dr. Lee Jong-wook award from WHO, among other awards.

The largest of the Antilles has a long history in terms of health cooperation since on May 21, 1960, when it offered its first International Medical Aid after the strong earthquake that shook Chile.