Argentina calls for a global reconstruction 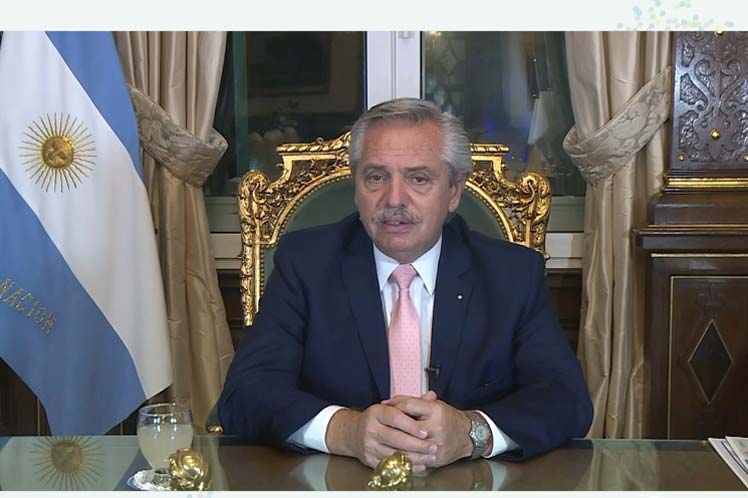 Argentina calls for a global reconstruction

Speaking virtually at the meeting, the president said that in order to prevent the catastrophic consequences that gaps create in a post-pandemic world, we must work to build a new multilateralism and favored an international financial architecture that would provide a multidimensional response to the problems of the world.

‘The time is now. The clock of history is ticking,’ he said after adding that without global financial social justice there will not be environmental justice and let alone social justice for the entire planet.

During his message prior to the G20 Summit that will be held in Rome, Fernandez said that, in times of a triple crisis caused by Covid-19, climate change and the debt that affects medium-income countries such as Argentina, it is necessary to rethink another financial architecture.

After describing as key the role and dynamics of development banks for post-pandemic reconstruction, the president favored an inclusive and sustainable agreement that can address issues related to sovereign debts.

In this regard, he favored a common framework to address the debt of medium-income countries and hailed the expansion of the Special Drawing Rights of the International Monetary Fund (SDR), an initiative that gives hope, he said.

The SDR should strengthen a global solidarity agreement that includes nations with high climate, socio-productive and financial vulnerability, which allows for the extension of deadlines for the payment of debts and the application of lower rates, he said.

The new destination of the SDRs should nurture global solidarity agreement that includes nations with high climate, socio-productive and financial vulnerability, an agreement with a spirit of solidarity that allows for the extension of terms to meet debt payments and the application of lower rates, he said.