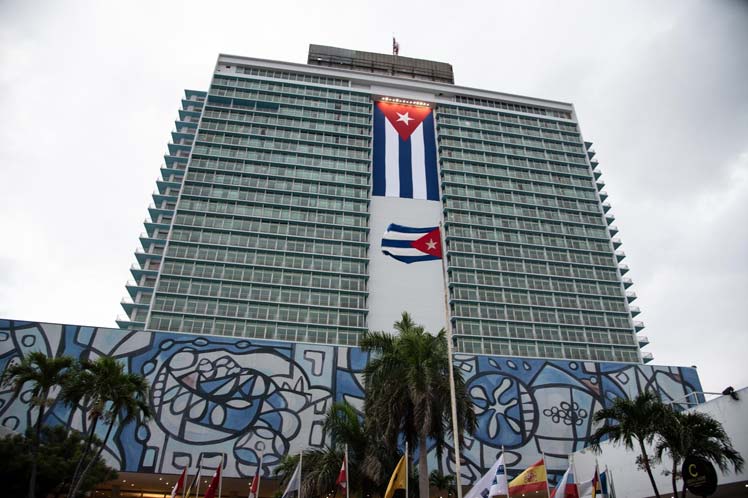 At the lobby of the Habana Libre Hotel, the notes of the Entrevoces Choir, under the direction of Professor Digna Guerra, National Music Prize winner, preceded the declamation of the poem My Flag, by Cuban poet and patriot Bonifacio Byrne.

In his speech, the dean of the San Geronimo College and historian, Felix Julio Alfonso, recalled the origins of the national flag, which guided the Mambises (Cuban rebels during the war against Spain) in the fight for independence and, in contemporary times, it accompanies the internationalist medical brigades, creators and sportsmen from Cuba all over the world.

He highlighted the initiative of the Confecciones Loida Group of Artistic Creation, which built a flag of unprecedented dimensions (28-m-long x 14-m-wide), which represents a size record in Cuba.

Belonging to the Cuban Fund for Cultural Assets (FCBC), the group, lead by creator Loida Fernandez Torres, dedicated the feat, completed in the mid 2021, to the scientists, doctors and health personnel who have tirelessly fought against Covid-19.

Likewise, Yaniel Díaz, head of the Alpinismo Borao construction brigade, told Prensa Latina how 15 persons worked tirelessly to anchor the flag at a height of more than 126 meters above ground level.

The ceremony was attended by Deputy Culture Minister Fernando Jacomino and the deputy chief of the Ideological Department of the Central Committee of the Communist Party of Cuba, Roberto Montesinos, together with political and governmental authorities of the Cuban capital.