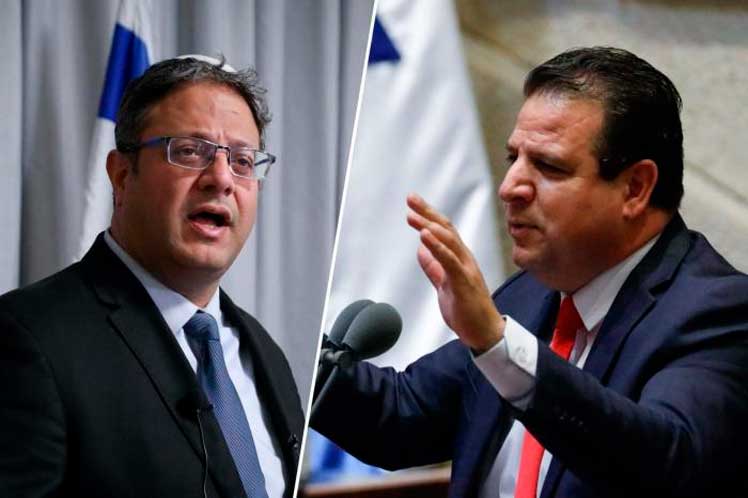 MP and leader of the Arab-Israeli Joint List formation, Ayman Odeh, yesterday visited Kaplan Medical Center in the city of Rehovot, some 20 kilometers south of Tel Aviv, to show solidarity with Miqdad Qawasmeh, a militant of the Islamic Resistance Movement (Hamas), on strike for more than 90 days.

Qawasmeh has been behind bars for months without charge or trial under the criticized concept of pre-trial detention, used by Israel to arrest Palestinians for renewable intervals usually ranging from three to six months on the basis of undisclosed evidence that even the defendant’s lawyer is barred from seeing.

Both Odeh and other Arab and leftist MPs reject pre-trial detention.

Upon leaving Qawasmeh’s room, he met with National Religious Party lawmaker Itamar Ben Gvir, who went to the center to complain that the young Palestinian, whom he considers a terrorist, did not receive medical treatment in an Israeli hospital, The Times of Israel reported.

Ben Gvir tried to enter the ward, but Odeh prevented him, which started the struggle that ended in a beating dispute.

‘Convicted terrorist Ben-Gvir tried to harm the patient. I blocked him. Kahanism will not go through,’ Odeh wrote shortly afterward on Twitter, alluding to the school of thought that follows the radical and extremist ideas of Rabbi Meir Kahane.

Ben Gvir is known for having for years in his living room a picture of Baruch Goldstein, who murdered 29 Palestinians in the Cave of the Patriarchs in 1994.