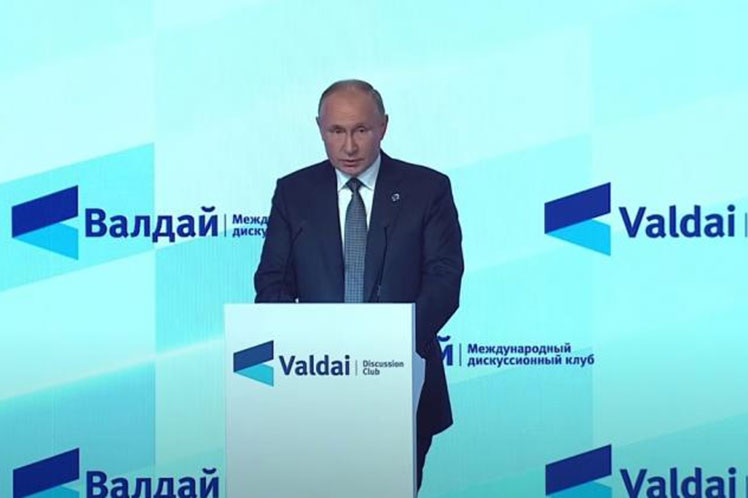 In the plenary session of the Valdai International Debate Club, in the city of Sochi, the president reported that Moscow will continue to ooperate bilaterally with China and that within the framework of the SCO it will allocate resources and help create conditions for protection of the surrounding Afghan nations.

‘It is very important for us to establish a plan within the OCS. Tajikistan and Uzbekistan located on the border with Afghanistan. In Tajikistan, there is our military base, created on the basis of division 201,’ he added.

In his speech, the head of state did not exclude the Taliban movement from the list of organizations that sponsor terrorism, but emphasized that this is a decision that must be approved by the United Nations (UN).

He said the international community hopes the Taliban, now in charge of the Government of the Islamic nation, ‘makes the situation develop in a positive way.’ He commented that Moscow is cooperating to strengthen contacts with the current Afghan Executive.

Putin warned about the presence of terrorist groups, including the Islamic State (IS) in Afghanistan and stressed his country is aware of how the Taliban movement’ is trying to get rid of these radical elements in some way.’

The Russian president pointed out that for the countries of the region it is ‘extremely important’ to have a ‘quiet and developing Afghanistan’ close to its borders that is not a source of terrorism and radicalism.

He indicated that Moscow is interested in seeing that Central Asian nation emerge from an incessant civil war, that its people feel safe within its borders, and that it have the opportunity to develop and prosper. ‘We will do everything possible to achieve that goal,’ he said.

The Valdai International Debate Club was created in 2004 and its main promoters were the Russian Defense and Foreign Policy Council, the RIA Novosti news agency and other Russian media outlets. Their meetings are held every year in different venues.