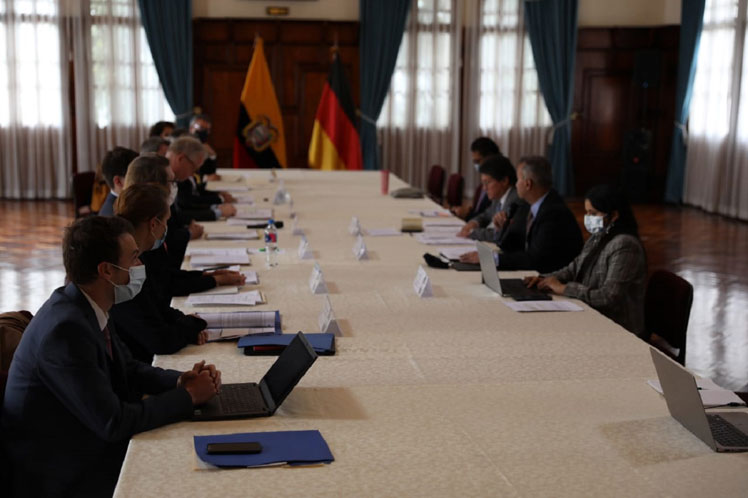 Representatives of both executives exchanged on these and other topics during intergovernmental consultations on bilateral cooperation.

The Undersecretary for Multilateral Affairs of the local Foreign Ministry, Juan Carlos Castrillón, pointed out that Germany is one of the largest cooperating countries in the field of protection and the environment, whose assistance has contributed enormously to the conservation of the natural heritage.

The parties discussed current programs such as distortion-free supply chains, with sustainability and added value in sustainable agricultural chains, bioeconomy and biodiversity protection in Galapagos.

They also reviewed initiatives in the areas of peace and social cohesion, the ‘Sincero’ proposal, which works against corruption, and ‘Sinfrontera’, aimed at migrants and host communities.

During the meeting, they also reviewed existing projects in the area of climate and energy, with an impact on sustainable urban development.

The Ecuadorian delegation was made up of authorities from the Ministry of Foreign Affairs and the Ministries of Agriculture, Environment, Production, Housing, Economy and Finance, Energy, Transport and Health.

Officials from the secretariats of Human Rights, Public Administration, Risk Management, the Development Bank of Ecuador and the National Finance Corporation also participated.

On the German side were the Ambassador to Ecuador, Philip Schauer, the person in charge of Cooperation with the Federal Ministry for Economic Cooperation and Development, Sören Müller, and the resident director of the German Society for International Cooperation, Cristiane Danne.