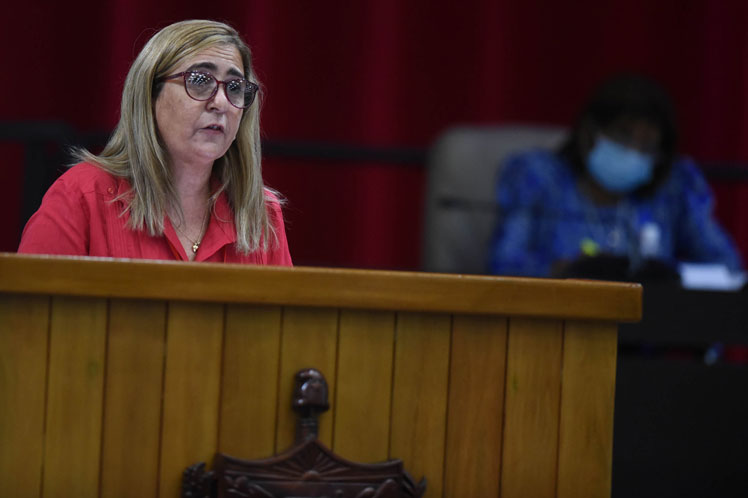 As expressed before Representatives to the National Assembly of People’s Power, meeting in a semi face-to-face modality, to whom she explained the state budget faced exceptional situations caused by the Covid-19 and the intensification of the blockade by the United States.

In the economic context, she said, the health situation and the US blockade had a negative impact on main activities such as tourism and others, in both the state and private sectors.

As an expression of the priority given by the State and Government to prevention and confrontation actions against Covid-19, which includes care and attention to the population, 1.676 billion pesos were additionally allocated, she said.

The state budget, she added, including local ones, financially supported the operation throughout the country of 257 isolation centers and 56 hospitals for patients with the disease.

In this scenario, more than 446 thousand people worked, including health, paramedic and support personnel, on the recovery of thousands of patients diagnosed with the virus at the end of 2020.

Wage guarantees, she argued, caused by effects of Covid-19 required 567 million pesos for the protection of interrupted workers and the artistic sector, as well as mothers of minors, a practice that continues this year.

Bolaños said that in the budget year to be settled, the first expenses of the monetary, exchange and financial ordering process that began in January 2021 occurred.

She said that the General Reform of Salaries, Pensions and Social Assistance began its application last December to guarantee that people had the income to assume the price increases expected as of January this year.

According to the report presented to Parliament, last year Cuba accumulated a fiscal deficit of 18.976 billion pesos (one dollar equal to 24 pesos), still lower by 1.758 billions than approved.

The report indicated the growth of the Public Debt, due to an expansive fiscal policy to support necessary expenses in public health, payments of wage guarantees and of raw materials and supplies, which include food and medicines.

Despite difficulties faced in the term, including the marked reduction in income, Cuba guaranteed the sustainability of services to the population, the Minister emphasized.