Cubans plant trees ahead of UN meeting on climate change 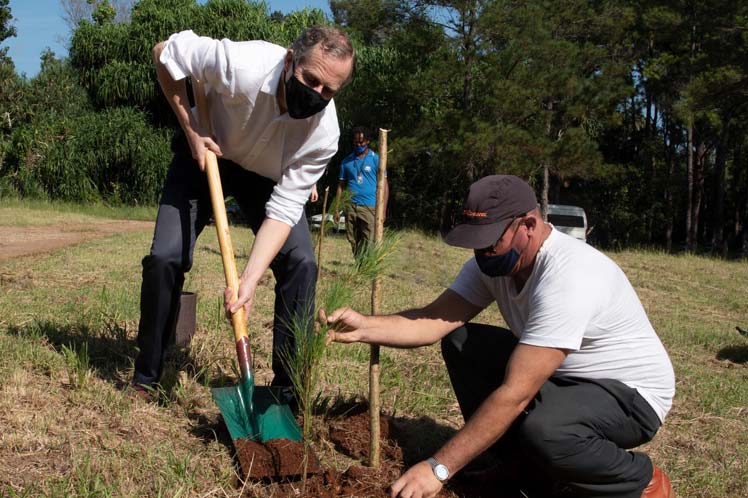 Cubans plant trees ahead of UN meeting on climate change

Havana, Oct 27 (Prensa Latina) Cuba's National Botanical Garden hosted today the planting of 26 trees as a symbol of commitment to a healthy and sustainable future, ahead of the upcoming United Nations Conference on Climate Change (COP26).

During the ceremony held in Havana, the representative of the Ministry of Science, Technology and Environment, Odalys Goicochea, ratified Cuba’s will to solve the challenges imposed by climate change, which is reflected in the State’s plan to fight against that problem, Task Life.

Four years after the implementation of Task Life, we have made progress in scientific knowledge on the issue, reduction of vulnerabilities, adaptation solutions based on ecosystems and communities, as well as the promotion of environmental education, she said. The UK ambassador in Havana, Antony Stokes, assured that the 26 pine trees planted become symbols of Cuba’s work in environmental protection, which in addition to the government plan stimulates the use of renewable energy sources.

In that sense, Stokes highlighted the collaboration of his country in initiatives carried out on Cuba, such as the construction of the first biomass plant in Cuban territory and a photovoltaic park.

The activity at the Botanical Garden also had the support of the Italian representation here, and its ambassador, Roberto Vellano, remarked that COP26 is an opportunity to show that the commitments made in past decades in the sector will be followed by serious measures and positive results.

The 26th Conference will take place from October 31 to November 12 in the city of Glasgow, United Kingdom, and will seek international cooperation to face current challenges.

Italy, which recently hosted a preparatory event aimed at youngsters and their ambitions for a better and more sustainable world, also participated in the organization of COP26.

The National Botanical Garden, located in the south of the city, is one of the largest in the world, and its 473 hectares are home to 3,000 species of plants.

The scientific, academic and recreational institution attached to the University of Havana is a leader in the conservation of Cuba’s flora.