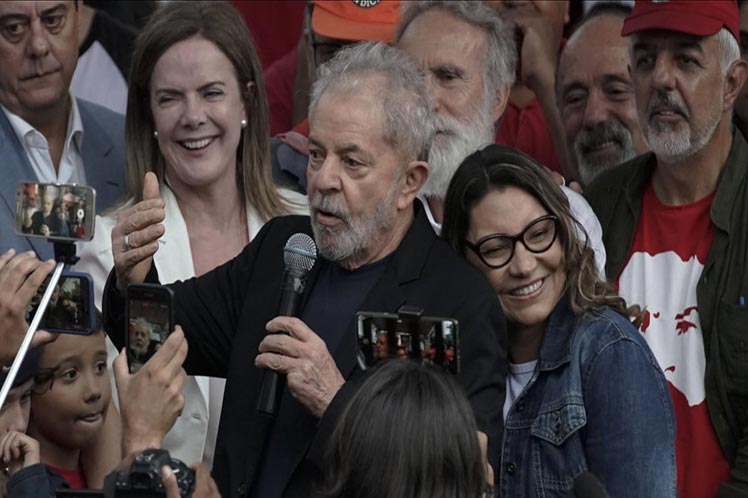 In a message on Twitter, the president recalled the birthday of the Brazilian leader celebrated yesterday, and expressed the Cuban people’s admiration for him.

‘Happy birthday and all days of struggle that lie ahead, dear brother @LulaOficial, Victor over hatred and political traps. Hugs from #Cuba that admires you, for you and your beloved #Brasil’, he wrote.

Lula also received congratulations from the ‘Partido de los trabajadores’ PT (Workers’ Party) of which he is a founding member and honorary president, and considered him the hope for a better Brazil.

According to a note published on the PT’s official website, ‘this anniversary has a special taste’ because it is the first since Lula, ‘as he promised, proved his innocence and showed he had been the victim of judicial persecution that tried to do away with his political leadership’.

The failed attempt took him out of the 2018 elections and kept him in prison for 580 days, but ‘it did not get any close to erasing the brilliance of this Brazilian giant’, the message said.

President of Bolivia, Luis Arce, also celebrated on Twitter the story of the struggle for the leader’s people and wished him many more years of success.

Politicians, intellectuals, artists, students and workers from various parts of the world joined in the congratulations and turned hashtags #LulaDay and #ParabensPresidenteLula into the most commented ones on Twitter.

During his mandate, Lula achieved economic success for his country, mostly in reducing poverty, with social programs such as Zero Hunger or Bolsa Familiar (Family Fund), which helped bring some 30 million people out of poverty in less than a decade.