Colón and transporters on fighting footing in Panama 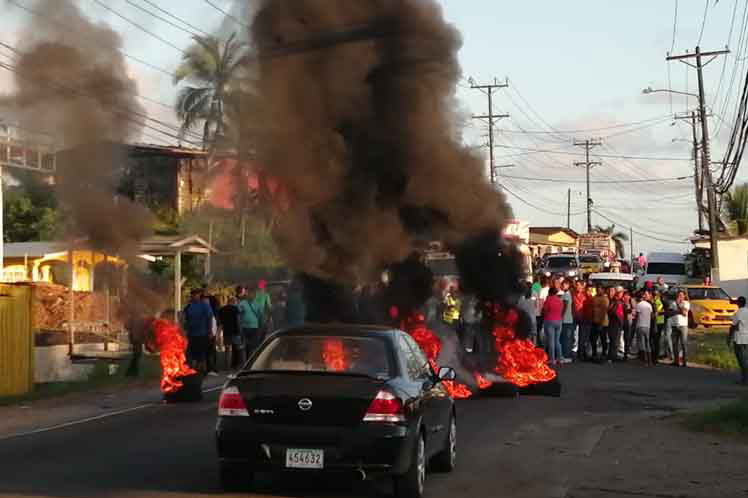 Colón and transporters on fighting footing in Panama

Blockades of the access roads to the city, the maritime ports and the Colon Free Zone, together with the call for a general strike which could continue this Friday, plunged the impoverished town into chaos, whose inhabitants are demanding employment, an economic recovery plan and health care, among other demands.

On the second day of the conflict, under demands to dialogue with the president of the country, Laurentino Cortizo, they rejected again the date proposed by the president to receive them, which is next November 11 in the capital, which he informed shortly before leaving last night for Glasgow, in the United Kingdom, to participate in the COP26.

We want the meeting before that date and here, in Colón, said angry protesters to the press, who through the media sent the message to the president that in that city ‘nothing would happen to him’ and that they could not wait so long to discuss the ‘untenable situation’, they said.

On his part, before flying to Europe, Cortizo warned of ‘consequences’ for the violent demonstrators, because ‘democracy must be defended’ and peaceful protest is accepted, a criterion he repeated when asked why he was traveling out of the country in times of complex political situation.

In a neighborhood of Colon, small groups described by the Police as ‘common delinquents’ confronted yesterday with shots at the officers, who in another place were received with stones and had to clean barricades where people set fire to tires and debris.

Also the freight and passenger transporters have been complaining in the streets for several days about the increase in the price of fuel and are asking for help from the Government to freeze the constant increases which prevent them from facing the acquisition of fuel for their commercial activity.

At least two large transport trade unions will meet in the central province of Veraguas to determine whether to call for an indefinite general strike until they receive government aid.

Both conflicts received the support of the large Sindicato Único Nacional de Trabajadores de la Industria de la Construcción y Similares (Suntracs), which held road closures and protests in solidarity with the demands of Colonenses, transporters and against the eviction of a community of the so-called ‘landless’, in Panamá Oeste.

The complex political situation of the country increased in the last hours with small street closures and protests of neighborhoods without drinking water service, while the crisis of retirement, old age and death funds in the social security, another of Suntracs’ banners of struggle, remains unresolved.

Bolivia gradually returns to normal according to authorities

Opposition in Bolivia is committing acts of terrorism

Bolivia gradually returns to normal according to authorities

Opposition in Bolivia is committing acts of terrorism