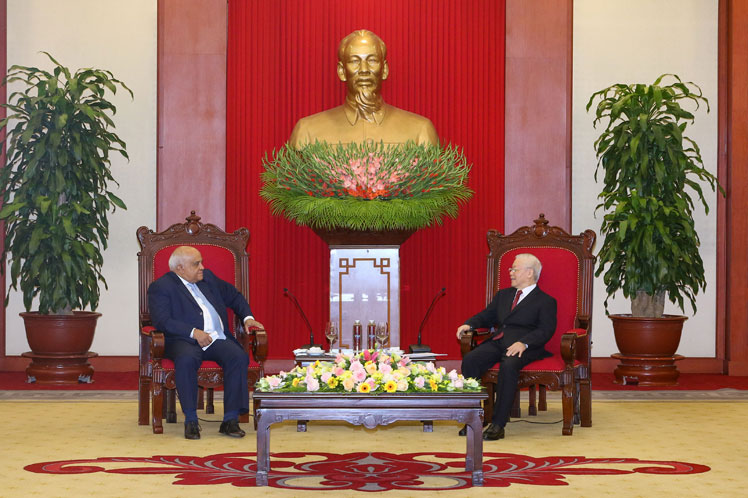 The party leader reaffirmed the Vietnamese people’s rejection of the United States blockade and the willingness to support the Cubans’ efforts in favor of development, despite all setbacks, a gesture for which the diplomat expressed his gratitude.

Highly valuing the offer to Vietnam of five million Abdala Covid-19 vaccine doses and the technology to produce it, Phu Trong described it as a new expression of solidarity from Cuba to Vietnam.

He recalled his five visits to Cuba, especially those in which he had long conversations with Fidel Castro, and with special affection, he evoked the one in 2018, when he received the Jose Marti Order and traveled with Raul Castro to Santiago de Cuba to pay tribute to the historic leader of the Cuban Revolution.

Hernandez Guillen highlighted the importance of Vietnamese President Nguyen Xuan Phuc’s visit to Havana in September and his statements against the US blockade, during the 76th Session of the United Nations General Assembly.

He also expressed his gratitude for Vietnam’s recent donations of rice to Cuba and its support for national food programs.

Both leaders recalled that 55 years ago, on a date like this, a meeting took place in Hanoi between Army General Raul Castro and President Ho Chi Minh.

Phu Trong recalled his telephone conversations this year with Raul and the president and first secretary of the Communist Party of Cuba, Miguel Diaz-Canel, and invited them to visit Vietnam.

The VCP general secretary and the ambassador agreed to strengthen cooperation between the two countries based on close work between agencies, ministries and other institutions.