Tribute in Cuba to doctor who denounced organizer of illegal march 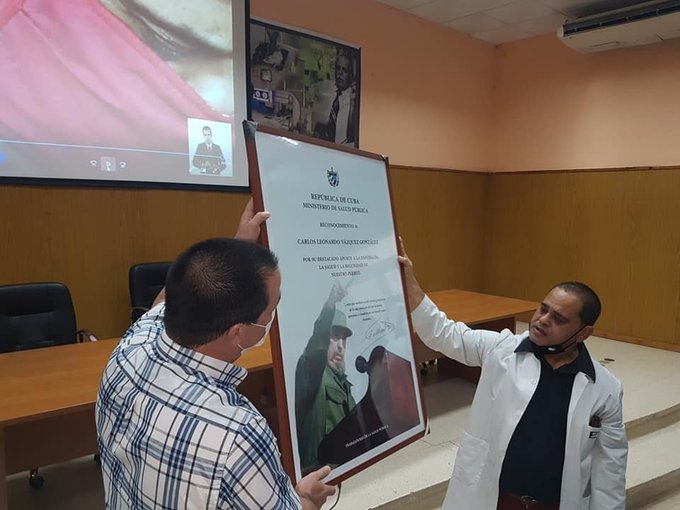 Tribute in Cuba to doctor who denounced organizer of illegal march

Havana, Nov 2 (Prensa Latina) Medical personnel of the National Institute of Oncology and Radiology paid tribute here today to Dr. Carlos Lorenzo Vázquez, who the day before denounced links of organizers of an illegal march with foreign services and terrorist groups.

Lorenzo Vázquez was recognized by his colleagues for his denunciation on national television of the destabilizing attemps of a march called for November 15, promoted by enemies of the Cuban Revolution in the United States.

The doctor, who identified himself as Agent Fernando of the State Security Organs, affirmed that Yunior Garcia, identified as the organizer of that march, promotes confrontation between the Cuban Armed Forces and the people.

In his appearance on the program Razones de Cuba, he referred to Garcia’s links with terrorists who have a history of aggressions against the island and think tanks that promote political subversion from U.S. territory.

He also warned about international programs for the training of leaders to promote regime change on the island, in which he participated together with Yunior Garcia.

The Cuban physician and first degree specialist in General Comprehensive Medicine and Oncology revealed that the intention of the march, first planned for November 20 and whose realization was vetoed by the Government of this capital for considering it unconstitutional, is “to provoke chaos, and civil disobedience”.

In addition, he said, they are looking for international organizations to apply sanctions that could justify a military intervention and the establishment of an alternative government in the Caribbean island.

“Yunior is seeking confrontation with the Armed Forces, with the Ministry of the Interior. He is calling for a march that he says is peaceful, but he knows it is not,” said the doctor who defined himself as a “revolutionary, Martiano and Fidelista”.