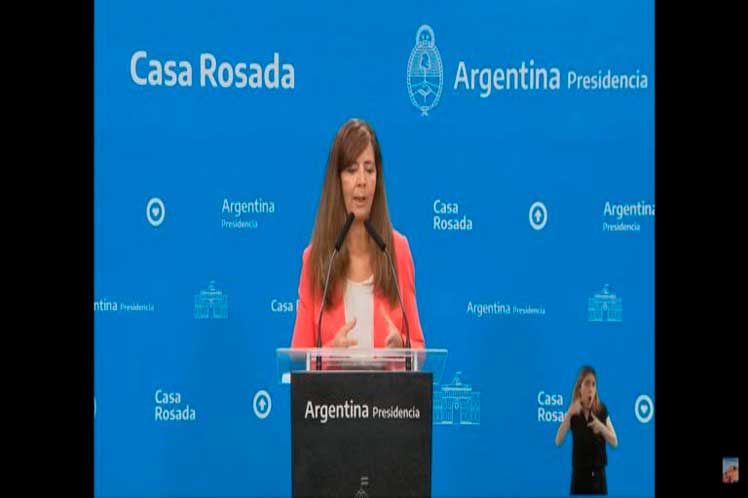 In her usual weekly conference, Cerrutti offered data on the progress in these last months by pointing out that collection grew by 56.7 percent in October and is the highest level since 2015. Economic activity registered a 9.3 percent rise over 2019 levels, 60 percent of formal private work recovered, which grew by 326 thousand jobs in a year and wages in August beat inflation.

In the final stretch of the electoral campaign on the way to the legislative elections of November 14, Cerruti asked the population to go to vote after highlighting that voting is a possibility to improve the future, individually and collectively.

In this regard, she stressed that voting is a duty but above all a right and a possibility. We have to express our voice about the direction we want to take. Vote for the candidate of your choice, or the political force or project with which you feel identified, but go to the polls, she said.

When asked about the episode the day before of former President Mauricio Macri, who assaulted the C5N channel upon his arrival to a court to be questioned in a case of espionage, Cerruti reiterated the Government’s repudiation to this attitude.

Regarding the case in which Macri had to testify, which points to an alleged espionage against the relatives of the 44 officers from submarine ARA San Juan, she recalled that President Alberto Fernandez, though with immunity, had a case opened against him for a photo of a dinner and made himself available to the justice system.

It seems to us an unclear attitude of the former president, making a circus around his appearance in court. The law is the law, everyone has to testify, she declared.

Finally, she referred to the pending debt with the International Monetary Fund (IMF) and reiterated that this organization will not write Argentina’s economic plan while the Executive seeks today the best possible agreement.