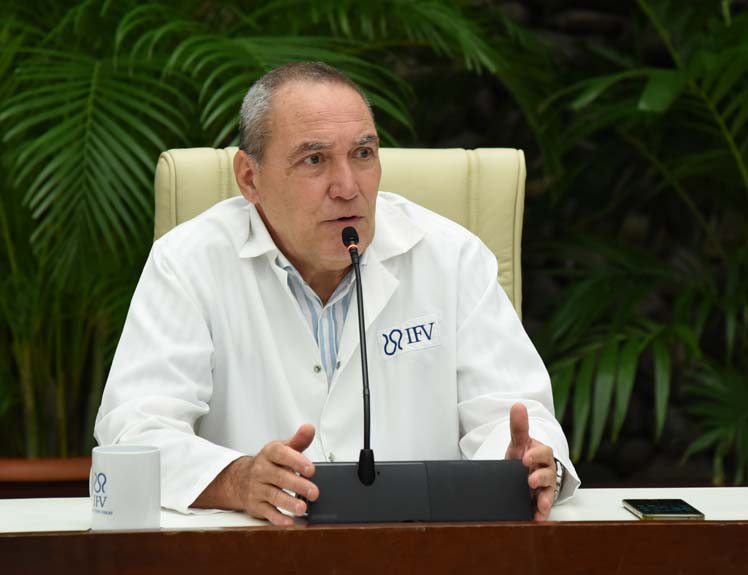 “They have always called me a dreamer, but all those illusions that I had when I graduated in Chemical Engineering at the Lomonosov University in Moscow, Russia, have been fulfilled and the Sovereign line against Covid-19 and other immunogens produced in our country are proof of this, ”said current director of the Finlay Vaccine Institute.

Overflowing with hugs, celebrations, thanks, tears and joy, almost unable to reach him to interview him, Dr. Vérez stopped with Prensa Latina to thank the recognition given this day by the bicentennial house of higher studies.

“It is the first official degree that I received from the University of Havana. My relationship with the UH is unusual: I did not graduate as an engineer in its classrooms, nor did I do my doctorate, but close ties of love bind me to it. Here I built most of my dreams ”, he said.

It was within their facilities where I did a lot of research and realized that I love pedagogy, he pointed out.

“I have a connection of over 30 years with the University and having its Honoris Causa in Chemical Sciences is something exciting and extraordinary,” added the also lead author of the Cuban synthetic antigen vaccine against Haemophilus influenzae type b.

Vérez acknowledged that his long career as an outstanding national and international scientist is not the result of his work alone, but of a group of researchers whom, he said, “I have managed to fall in love with.”

He stressed that getting to what it is today has been the result of the work of the Cuban Revolution, led by Fidel Castro.

“It has been this tremendous work that led the country to have its own vaccines and decide when, how and to whom to give them. Other nations had to ask for permission, but the three pillars of education, health and science propelled us. The Revolution brought us to this point, and there is no other alternative”, he added.

Regarding Verez’s career, the president of the Business Group of the Biotechnology and Pharmaceutical Industries of Cuba (BioCubaFarma), Eduardo Martínez, affirmed that Vérez is a great scientist, with concrete results and work done “from the heart”.

On her side, the rector of the University of Havana, Miriam Nicado, asserted that the UH is marked by the work of Vicente Vérez.

“It is a paradigm. Dozens of scientists trained by him have come out of the halls of this center ”, she pointed out.

About my father, I can only say today that I am very proud. Since I was little I have always seen him work and dedicated to chemistry and research. It has been a very emotional day, said Claudia, daughter of the also decorated since 2015, with the Knight Order of the French Legion of Honor.