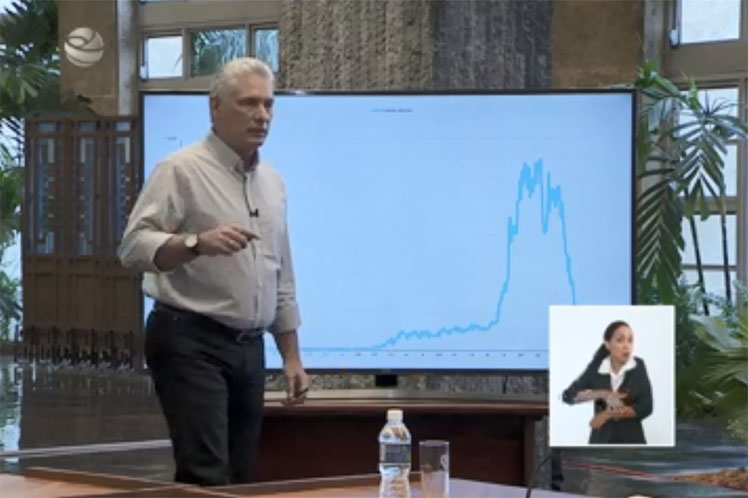 During his TV appearance, the Cuban head of state stressed that his nation is living a moment of celebration after difficult times with a high incidence of the pandemic, however, he harped on the need to take care of scientists and people´s efforts.

Díaz-Canel analyzed charts displaying positive Covid-19 case numbers since March 2020, as Cuba began to fight the pandemic with a too low incidence.

The Cuban president recalled that from March 2020 the updating of protocols and vaccines to deal with the infection started off, allowing an initial control and the first opening of borders in December 2020.

The flow of tourists and Cubans living in other countries, our inability to place everyone in isolation centers and the lack of rigor in home quarantine led to a considerable increased coronavirus cases and the new delta variant, the president recalled. “When we started off by applying vaccine studies in risk groups and communities, we got some results that later allowed the mass vaccination, then immunization enabled to a remarkable decline in past four weeks,” he said.

Díaz-Canel compared the incidence of the coronavirus with international cases, showing a greater control taken in Cuba compared to the region and around the world.

“Despite all problems we have faced, the US blockade-generated slackening, if we had not faced this disease with our own vaccines we could have faced a lethality two or three times higher than the current one,” he said.

The head of state insisted on the need to learn to live with coronavirus and praised both science and innovation management model that allowed to reach Cuba´s current results.

Vaccines gave us sovereignty and more than 70% of the Cuban people is vaccinated nowadays, while 90% have received at least one dose, he said.

“We are growing in vaccination speed by 4% per week, while other nations do not reach more than 2%,” the Cuba president stated.