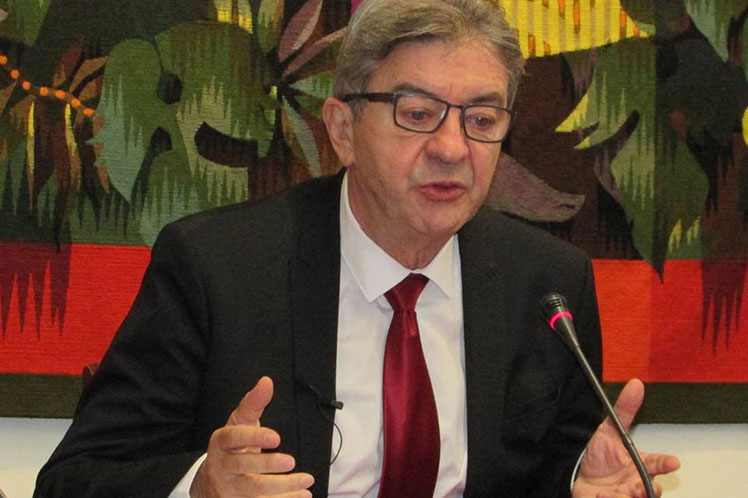 Paris, Nov 12 (Prensa Latina) The leader of Insubordinate France and presidential candidate, Jean-Luc Mélenchon, today added his signature to that of hundreds of personalities who in the world back a statement in defense of Cuba before the American aggressiveness.

The parliamentarian and relevant figure in French politics supported the document entitled “Letter to the International Community: Stop the Blockade and the destabilizing actions against Cuba”, an initiative that reminds Washington that the island does not carry out activities against its security nor does it meddles in their internal affairs.

Mélenchon thus ratified his traditional position of condemnation of the economic, commercial and financial blockade imposed by the United States on the largest of the Antilles for more than 60 years.

The open letter promoted by intellectuals, journalists and writers as Ignacio Ramonet, Hernando Calvo Ospina, Atilio Borón and Fernando Buen Abad denounces the 243 measures adopted by Donald Trump to intensify the siege, all maintained by his successor in the White House, Joe Biden.

Likewise, it repudiates the millionaire investments made for decades by the US government to create “dissidents” -despite their irrelevance in the interior of Cuba-, promote subversion and generate chaos, “with the sole purpose of ending the current political system and establish one that responds to their unique interests”.

The document comes to light in the midst of a new crusade by Washington, which uses small counterrevolutionary groups as a spearhead to organize and finance demonstrations in the Caribbean country, aimed at regime change.

Regarding Mélenchon’s support for the initiative, the member of the international team of France Insoumise Christian Rodríguez told Prensa Latina that for this political force it is essential that the recurrent demand of the UN General Assembly about the end of the blockade be met. In the same way, he considered unacceptable that in the current context of Covid-19 and the damage accumulated by a blockade that he described as inhumane, destabilization operations are carried out.

In this sense, he reiterated his solidarity with the island and the demand for the immediate lifting of the siege that strangles the people of the Antillean nation.

Employees of mobile companies in Lebanon continue their strike

President of Ecuador calls for referendum in 2023