Back to classes in Cuba, an encounter with hope 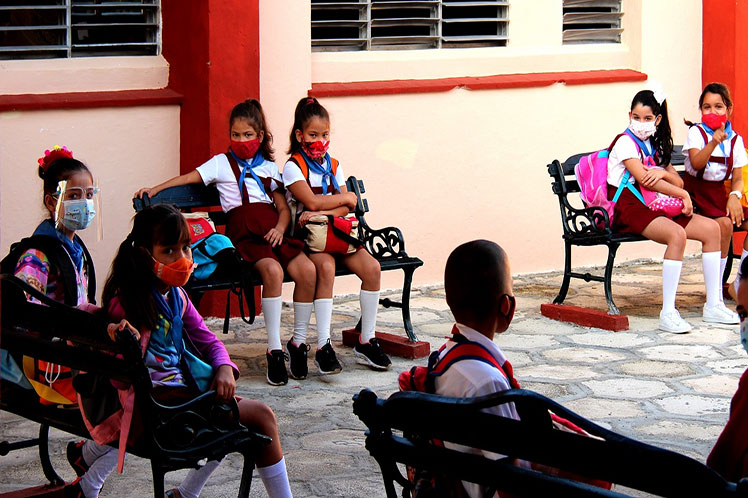 Back to classes in Cuba, an encounter with hope

This fact was known at the central act of reopening held by teachers in Yaguajay, chaired by Deyvi Pérez, first secretary of the Communist Party in the territory and member of the Central Committee.

Once again, the flag of the lone star was raised and the Bayamo Hymn was sung in hundreds of schools in the plains and in the mountains, in a scene of joy and tranquility, where support for the Cuban Revolution was revealed.

For Ofelia Gutiérrez, a young mother, this moment also served to recognize the country’s efforts to achieve the immunization of all our children, a new encounter with the reality of her hopes.

Prensa Latina shared with infants full of joy the reunion with their friends and teachers, a celebration that was also enjoyed by parents, grandparents, uncles and family.

Isabelita, Cristina, Alberto and Fernando, like the rest of the students, wore their uniforms and scarves, and carried notebooks and books, among the latter The Golden Age, by José Martí, with his thoughts on training our children to be good men and women.

While at the Pedro Domingo Murillo elementary school, in the Ciudad Escolar Libertad, in Havana, the president of Cuba, Miguel Díaz-Canel, led the central activity for the reopening of the school year for elementary school students.

The president highlighted the national rejoicing at the incorporation of students into classes, the restart of international flights and the reopening of cultural, social and economic spaces.

More than 1,700,000 infants and young people are already in 10,754 educational institutions in the country, and more than 90 percent are vaccinated with nationally produced immunogens.