Support for Cuba in the United States capital 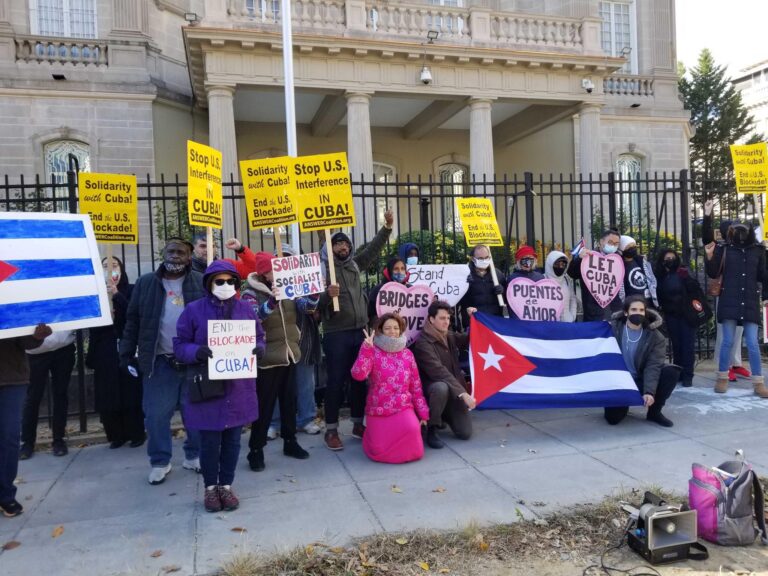 Support for Cuba in the United States capital

In the demonstration, in this capital, groups such as CodePink, Answer Coalition, DC-Metro Coalition of Solidarity with the Cuban Revolution, the Democratic Socialists of America and the Communist Party of the United States participated.

Despite the low temperatures, the attendees remained there with banners reading messages such as “Enough with the interference of the United States in Cuba”, “Solidarity with Cuba”, “Puentes de Amor” and “End of the US blockade. To Cuba”.

With their presence they demonstrated the rejection of the people of the United States to the policy of their government against the Greater Antilles.

The activists celebrated the reopening of the borders of the island nation after 20 months of hard combat against the Covid-19 pandemic and reiterated the demand to the Joe Biden administration to eliminate the unilateral siege that for six decades tries to suffocate the Cuban people.

Various demonstrations of support for Cuba took place in different American cities and other parts of the world this Monday, the day on which members of the 31 United States-Cuba Friendship Caravan also arrived in Havana, an initiative promoted by the Interreligious Pastors Foundation. for the peace.

Gail Walker, its executive director, said that the caravan represents the countless people in the United States who oppose the blockade against Cuba and are disappointed with the policy of the Biden administration.

The group, made up on this occasion by some 74 caravans from about twenty American cities, will remain on the island until November 26.

The current Democratic administration, which in the opinion of experts maintains the automatic pilot of the Donald Trump era (2017-January 2021), has done nothing to eliminate the 243 measures adopted by the Republican.

According to complaints from the Cuban authorities, these measures meant a resurgence of the economic, commercial and financial blockade in the midst of the Covid-19 pandemic.