Republic Plan in Venezuela activated for the security of elections 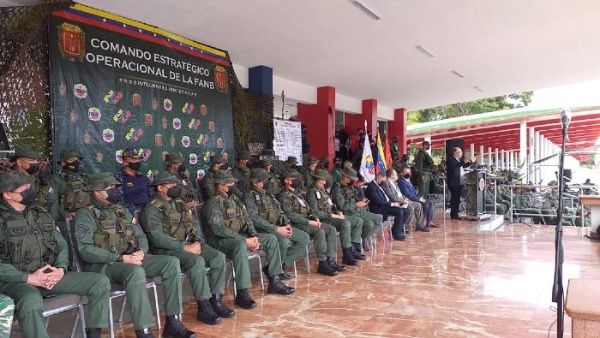 Republic Plan in Venezuela activated for the security of elections

Caracas, Nov 17 (Prensa Latina) The Bolivarian National Armed Forces (FANB) of Venezuela activated on Tuesday the so-called Republic Plan to guarantee security during the November 21 elections, in coordination with the electoral authorities and other state entities.

More than 356 thousand military will be in charge of the protection of the 14,262 voting centers throughout the national territory, in addition to the remaining facilities and infrastructure that support the CNE platform, announced the strategic operational commander of the FANB, Domingo Hernández.

During the deployment of the media and military personnel, in the Paseo de los Próceres, in Caracas, the military high command indicated that the networks and repeater antennas of the country’s media and telecommunication companies will also be protected.

The FANB will also ensure the protection of the members of the international observation missions, as well as the authorities of the electoral power.

In this regard, Defense Minister Vladimir Padrino highlighted the civic nature of the deployment of the Republic Plan to accompany the people during the November 21 elections.

The holder stressed that the FANB has a clear task of accompanying logistics, custody and security of the electoral infrastructure and to guarantee the stability of the country and the development of the democratic event in an environment of peace.

For his part, the Minister of Internal Relations, Justice and Peace, Remigio Ceballos, reported that troops of the armed forces will be joined in surveillance and protection actions by more than 98,000 police officers and the rest of the security agencies.

Ceballos specified that as part of the regulations adopted to guarantee citizen tranquility during the elections, as of next Friday the prohibition of sale and consumption of alcoholic beverages in public spaces, as well as carrying of weapons and mass concentrations, will come into effect.

More than 21 million Venezuelans are summoned to the polls in the so-called mega-elections to choose the 23 governors and 335 mayors of the South American country, in addition to members of the regional legislative assemblies and municipal councils.

During the activation of the Plan República, the president of the CNE, Pedro Calzadilla, highlighted the permanent coordination of the electoral authorities with the military high command and the security organizations, to ensure the successful development of the process.