Mexico and Canada for strengthening ties 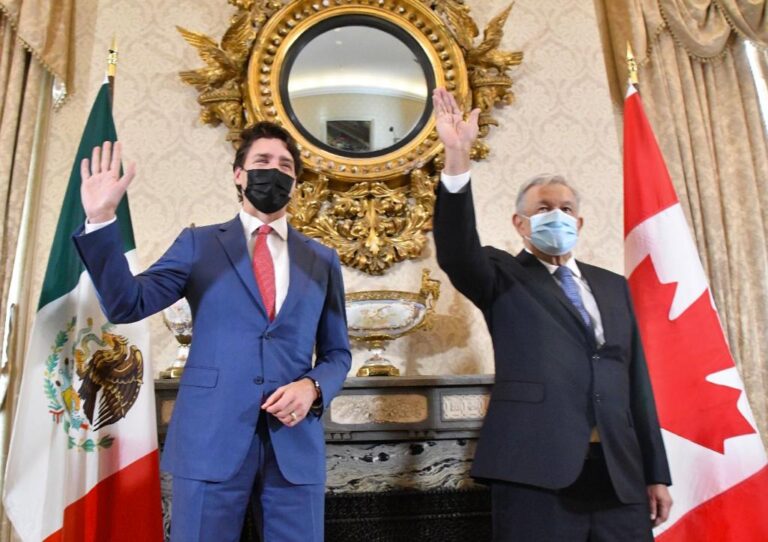 Mexico and Canada for strengthening ties

Both dignitaries held a meeting shortly before starting the IX North American Leaders Summit with the participation of the host, president of the United States, Joe Biden. The Mexico-Canada bilateral event took place at the Mexican Cultural Institute in Washington DC, indicated an official note issued by the Mexican delegation.

According to the source, López Obrador expressed being very happy to meet Prime Minister Trudeau.

We are peoples, sister nations that are very close, we belong to North America and we have many things in common and, most importantly, a very good relationship of cooperation and friendship, he said.

Trudeau responded that it was also a pleasure for him to have the opportunity today to speak about all the common issues, such as indigenous peoples, women’s leadership and the fact they are great allies.

It is an honor for me, he added, to have the opportunity to sit down today to chat with the President of Mexico, as it will be to do so throughout this tripartite session of North American dignitaries.

During their first face-to-face meeting, adds the note from the Mexican delegation, both leaders agreed on the importance of the bilateral link, centered on a humanist vision.

The Mexican president and Canadian prime minister emphasized that prosperity must be the result of actions that guarantee equality, security and development for both peoples and the region as a whole, the information said.

Under this vision, the president and prime minister agreed to move towards a more inclusive economic integration, in which young people, women and indigenous communities benefit from greater commercial cooperation under the economic opportunities offered by the T-MEC, Add

Based on mutual coincidences to advance in terms of inclusion and reconciliation with indigenous communities and peoples, President López Obrador proposed to continue working closely, including deepening the dialogue between governments and communities of Mexico and Canada in order to share experiences and successful perspectives.

The fight against inequality through fairer wealth redistribution measures represents another central coincidence between the two governments.

In this regard, López Obrador shared his vision on the need to move towards a global system that guarantees equity and inclusion, in accordance with the World Plan for Fraternity and Well-being presented to the United Nations Security Council.

Both heads of state highlighted the importance of advancing in the consolidation of a North American community in which the quality of life and well-being of the people is the central ruler of public policies of the governments.