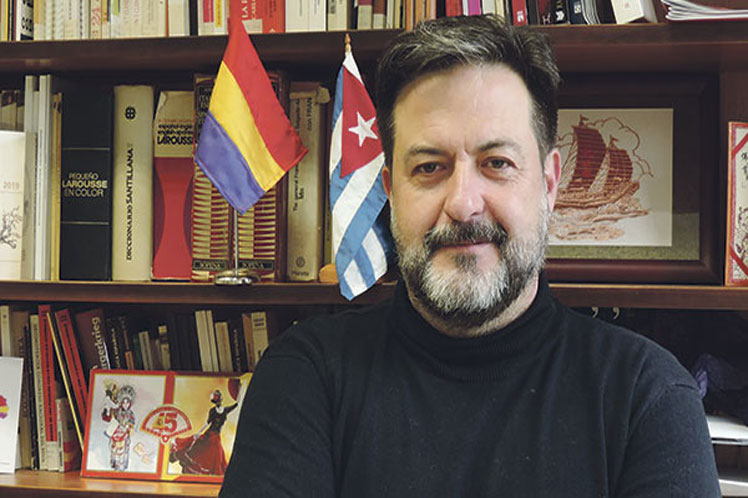 He thus expressed it in a press conference that preceded a meeting with the leader of the Popular Party (PP), Pablo Casado, furious enemy of the Cuban Revolution.

It was the Madrid premiere of the playwright trained in Cuba, and the beginning to oxygenate his troubled image of dissident, after he left hanging those who he promised to mobilize in the “Civic March” of November 15, which never happened.

It seems that in the meeting with the leader of the PP, García received signs to change the language, release masks and reveal his true face, now well attached to the most recalcitrant exponents of what in Cuba they define as the Miami terrorist mafia.

A bell of this was the tweet that the PP placed on the networks as proof of his meeting with the newcomer.

“Cuba is a terrible dictatorship with thousands of murders and political prisoners,” says the message that Yunior tacitly subscribed and to which the “mentinometer” was uploaded.

“What exists in Cuba is fascism,” snapped the one from the so-called Archipelago movement, whose followers were surprised and disenchanted with his hasty and secret escape.

In Cuba, “people are treated like worms, they are threatened and beaten,” he added without modesty and then declared that the leadership of the Antillean country “are pigs that walk on two legs.” That and more uttered tourist Yunior García, as says the visa he received from the Consulate of Spain in Havana.

Adjectives coated in bile and lies with which he dismissed the “pacifist” character from flower in hand and dressed in white that in the end he did not wear on the promised date.

This was the case in Madrid, while in the Cuban capital a Spaniard, a MEP to others, gave his opinion from the opposite corner.

It is Manuel (Manú) Pineda, who considers that “Cuba has been a benchmark of dignity and a permanent encouragement to the dreams of brotherhood and social justice.”

Manú lived the November 15 Cuba, when thousands of students returned to classrooms and the day when the Caribbean island opened its borders to travelers and tourists after a long and hard battle against Covid-19.

According to the vice president of the Friendship Group with Cuba in the European Parliament, the Cuban president, Miguel Díaz-Canel, is suspended in the matter of dictator.

He told him when they both shared a concert in front of Havana’s Parque Central, along with young people who staged a sit-in in defense of the revolutionary process.

Manu Pineda repeated in Havana what other times he expressed in the legislative chamber of the old continent:

“The boot-lickers, butlers, lackeys of the worms want to destabilize our brotherly people, our referent people. And we have to say: Cuba is not alone. Cuba is respected “.