A passion for the ‘marimba’ 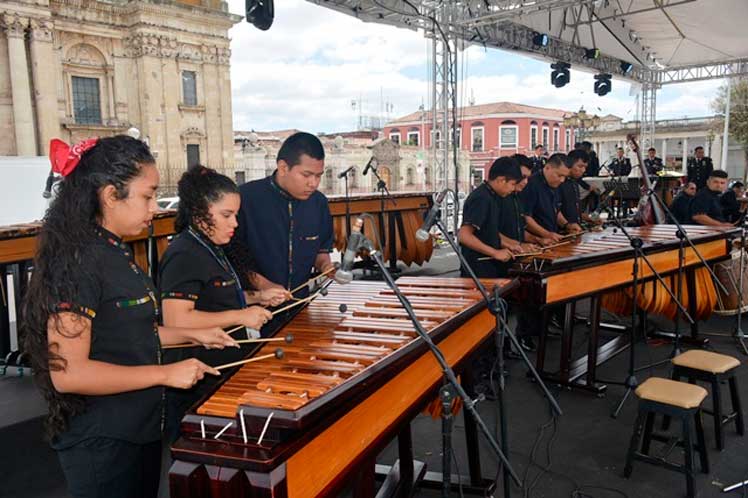 A passion for the ‘marimba’

To speak of the ‘marimba’ in the land of the ‘quetzal’ is to go back in time. It’s been qualified in different ways; cultural heritage, identity elementand acousticevent, object of passion and national handicraft jewel would be enough to have a notion of its meaning for the ‘Chapines’ at heart.

Its origins, however, are still controversial. Was it born in Africa or Indonesia, perhaps in the Amazon? These are only half-answered questions, but, without a doubt, Guatemalan creativitymade a contribution so that it could be reinvented.

Léster Homero Godínez, creator of the concert ‘marimba’ concept, assures that the African continent contributed with the idea of putting splints one after the other to be played, as well as the Bantu word.

From Europe came the tempered musical system (12-tone scale), which assigns a name and a specific sound to each splint; while Central America provided exclusive materials, such as ‘hormigo’ and ‘güisil’ wood to make keys and drumsticks, without forgetting the legacy of the tuning used by Mayans.

The fusion of all these cultural elements led first to the creation of the hoop or bow ‘marimbas’, which had an ‘hormigo’ keyboard placed on a pine or cedar frame, besides a cloth belt with which the musician could carry it.

Historians say that pumpkins or ‘tecomates’ were hung to amplify the sound and they can still be seen in museums and in distant parts of the city. Shortly after, the simple version appeared, with only diatonic scales, resonance boxes and a keyboard on which three or four people play, depending on its size. This structure was later joined by another small one called tenor.

At the beginning of the twentieth century, double-keyboard instruments emerged, capable of producing chromatic scales. Its invention is attributed to Sebastián Hurtado from Quetzaltenango, at the suggestion of the outstanding musician Julián Paniagua.

Thus, Guatemalan creativity made the instrument its own until it ended up being a national symbol by Congress decree in 1999. This means that it must be highly respected along with the ‘monjablanca’ flower, the ‘quetzal’, the ‘pentandra’ ceiba (silk cotton tree), the national anthem, the flag and the coat of arms.

In the country there are currently outstanding composers whose talent and inspiration have contributed not to let ‘marimba’ music die, also declared a Cultural Heritage of the America’s in 2015.

But the greatest tribute takes place every February 20, when some 10 ‘marimbas’ gather all day in the capital’s Plaza de la Constitución (Constitution Square) in a huge concert, with a popular touch.