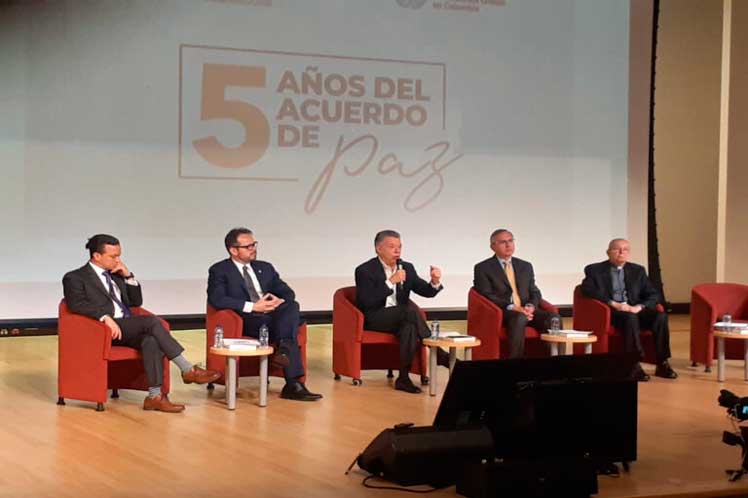 During the inauguration of a commemorative event at the Externado University of Colombia for the five years of the historic agreement, he stressed that the ceremony supported by the United Nations is an opportunity to relaunch the Agreement.

In such a way that all its objectives become a reality, according to Santos, who on behalf of the State signed the Agreement in 2016 with demobilized Revolutionary Armed Forces of Colombia-People’s Army (FARC-EP).

The ex-governor pointed out that the pact has more than 300 pages and Colombians have not read it, however, he said, there is the solution to many problems that the population suffers today.

He explained that the Agreement goes far beyond the reintegration of ex-combatants from former FARC-EP because it seeks to solve structural problems like the land.

That is a point, as well as the democratic transformation in which little progress has been made, he stressed.

Another problem is drug trafficking, which, despite the fact that its solution is stated in the text, in at least some of its aspects continues to hit the country, Santos added.

The former president explained that academics from various instances highlight the strength and spirit of the agreement, the progress of the Truth Commission that listened to the victims and actors of the conflict.

“Many people have wanted to derail that ‘train’, but they have not been able to”, he emphasized.

He stated that it moves on with difficulties, among which murders of ex-guerrillas and social leaders stand out, which has to do with the non-implementation of the agrarian reform.

He assured there are positive and negative aspects, but the important thing is that all Colombians commit to giving a boost in the next 10 years to the Peace Agreement.