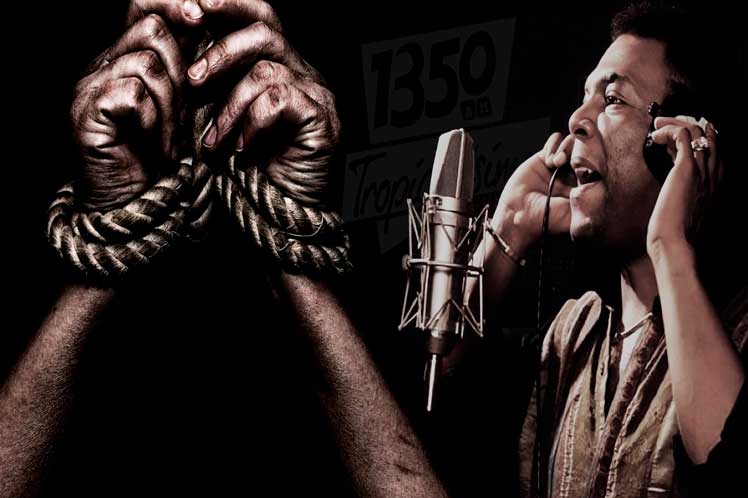 We are talking about La Rebelión (Rebellion), with its unmistakable ‘pregón’ “Oye, man… No le pegue a la negra!” (Hey, man … don’thit the black woman).

Recognizable from the initial piano ‘tumbao’, a prelude to “¡Dice!” with which the mythical “Centurión de la Noche” authorizes the brass musical session, La Rebelión is one of those rare piecesable tomake you think when you’re dancing, and vice versa. If famous writer Gabriel García Márquez, also from Colombia, said that he would have liked nothing more in the world than to write the “beautiful and terrible” story of Pedro Navaja, Arroyo achieved with his important tune an authentic chronicle in which he captured pain and protest, joy and freedom, telling us that “in the 1600’s, when the tyrant ruled, the streets of Cartagena lived that story”.

Beyond its message, this song has a curious history that begins with a “self-plagiarism” that Arroyo made and that went beyond his untimely death, on July 26, 2011, at the age of 55 and with a life full of work and a lot of night partying.

The Cartagena-born musician presented the song in 1986 as the B-side of the album Musa Original (Original Muse), his seventh with the orchestra La Verdad (The Truth). But eight years earlier he had given it to Joe Urquijo, who recorded it under the name El mulato in the phonogram Robert y su Banda (Robert and his band). According to the credits, the composer was Adela Martelo, Arroyo’s wife at the time.

It so happened that in those years Arroyo was the star vocalist of Fruko y sus Tesos, and as he had no plans to do anything with his composition, he gave it to Urquijo, who was with a rival record label, and to avoid contractual problems, he registered it under Adela’s name.

Time went by, and with his own band, Arroyo finally released what would become his emblematic song, of which the artist offered several versions. He first said that he was inspired by a visit to the Museum of Slavery in Cartagena, after that he said that the idea came from a school reading and, finally, that it came from the heart, from his own life story.

Raised in the Nariño neighborhood, built on former runaway slave ‘palenques’, Arroyo “rewrote” Afro-Colombian history with the piece, changing the black woman’s body into a scene of political questioning, resistance and struggle for liberation, according to an essay by US historian William E. B. Dubois.

With arrangements by Michi Sarmiento and an impeccable solo that could have been by violinist Alfredo de la Fé, but that Chelito de Castro embroidered on the piano, La Rebelión marked a turning point in Arroyo’s musical career and took him to the top as a dancing music legend, who a decade after his physical passing still makes us dance if we hear his emblematic “Dice!