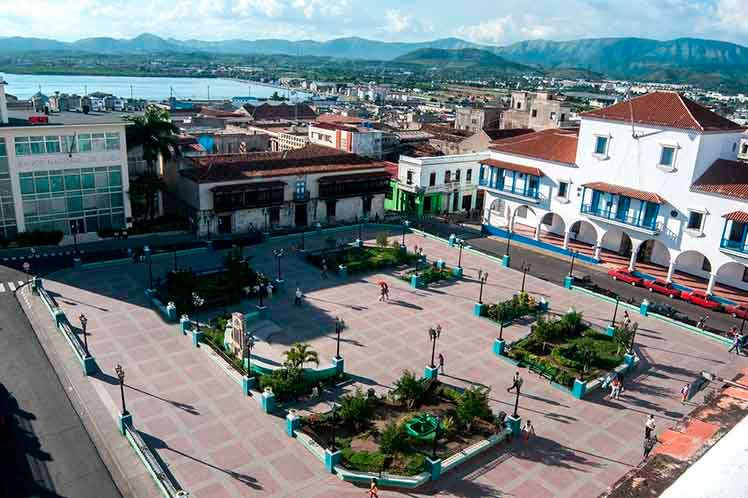 Santiago de Cuba, Nov 22 (Prensa Latina) Although at noon the high temperatures make the bay reverberate and each steep hill of its streets becomes a challenge for walkers, the eastern city of Santiago de Cuba has a special charm and attracts both inside and outside the island’s borders.
Share on facebook
Share on twitter
Share on whatsapp
Share on telegram
Share on email

In an admirable symbiosis between the ancient and the modern, the patrimonial and the historic, the seventh villa founded by the Spaniards 506 years ago shows visitors an attractive panorama that combines the blue of the sea and the green of the mountains and where the stairways help to overcome a rough topography.

The epicenter of the urban plot is the Corredor Patrimonial de Las Enramadas, a commercial artery par excellence in which the inhabitants of the city frequently converge, sometimes surprised to find friends and acquaintances whom they had not seen for a long time.

The Gran, Imperial and Enramadas hotels along that street offer attractive lodging possibilities with the proximity of gastronomic, cultural and commercial centers in a complex whose most recent acquisition is the Bodeguita del Medio, part of the franchise of the emblematic Havana tavern.

The Céspedes Park, with the cathedral and the house of Spanish conquistador Diego Velázquez —considered the oldest in the nation—; the Plaza de Marte, or the imposing Castillo de San Pedro de la Roca, built at the entrance of the bay in the 17th century, are must-see sites for those who want to get to know the history and daily life of the city, which is also famous for being the cradle of Cuban light rum.

A musical city and birthplace of several traditional genres of the Cuban pentagram, the emblematic Casa de la Trova, the oldest in the island, is a true temple that worships the Matamoros trio, Ñico Saquito, Sindo Garay, Compay Segundo and other greats.

The local carnival —the most relevant in the country and held every year in July— was declared Cultural Heritage of the Nation in 2015. The designation recognized the popular tradition and artistic values summarized in the so-called Rumbón Mayor, whose celebration was limited by the pandemic in 2020 and 2021.

A closer look at the virtues of the city —second in importance on the island—highlights its historical lineage, which has in the Loma de San Juan, the vestiges of the first imperialist conflict in the world, when part of the Spanish-Cuban-American war took place at the end of the 19th century. As the result of that history, the Moncada Barracks was attacked by the historical leader of the Revolution, Fidel Castro and other young men of his generation on July 26, 1953, to put an end to the neocolonial republic initiated at the dawn of the 20th century with the US invasion.

The current Abel Santamaría Park-Museum and the Palace of Justice, also attacked that day, are part of the monumental complex that evokes the event. The birth homes of the leaders of the revolutionary struggles are also part of these treasures of memory.

In the Santa Ifigenia patrimonial cemetery, the city proudly preserves the mortal remains of National Hero, José Martí; the initiator of the liberation struggles in the 19th century, Carlos Manuel de Céspedes, and of the Mother of all Cubans, Mariana Grajales. To that immortal triad, Fidel Castro was incorporated, on Sunday, December 4, 2016, whose ashes rest in a simple rock-monument. The town of El Cobre, one of the most visited sites with its Sanctuary of the Virgin of Charity (Virgen de la Caridad del Cobre), Cuba’s Patron Saint, deserves a separate chapter, as does the Bacardi Museum, the first in the country.

Santiago, that physical framework of enormous cultural and architectural values, is home to cheerful, extroverted, supportive and communicative people who welcome visitors, proud of the land they inhabit.