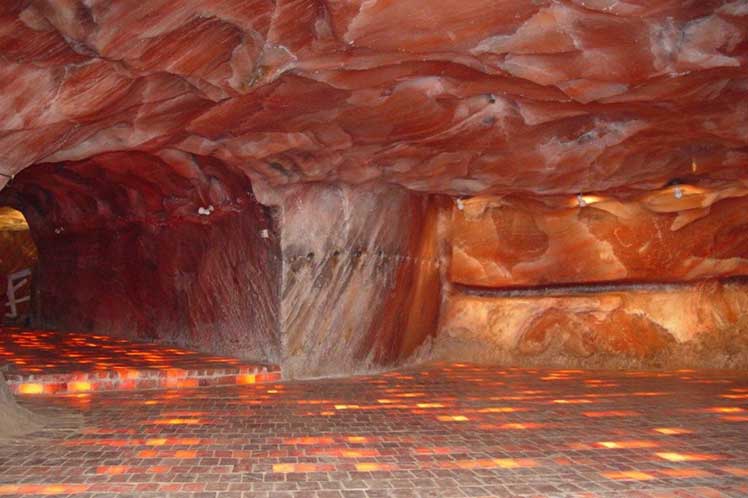 New Delhi.- Bordering the foothills of the high snowed peaks of the majestic Himalayas is the Khewra salt mine, the largest in Asia, where centuries ago worn-out horses of the legendary Alexander the Great armies licked rocks of attractive color and distinctive flavor, discovering that peculiar spice.
Share on facebook
Share on twitter
Share on whatsapp
Share on telegram
Share on email

Located in the Salt mountain range, in the mountainous region of Punjab, in Pakistan, some 160 kilometers from Islamabad, the site began to be extensively exploited in 1872, boosted by British colonizers.

After national independence was achieved, the Pakistan Minerals Development Corporation took over the country’s largest salt mine, with more than 350 000 tons produced every year, its reserves estimated to range from 82 million to 600 million tons.

The mine includes an area of 110 square kilometers and has 17 levels, 11 of which are underground, and with its depth of 167 meters is a major attraction for the quarter of a million tourists who visit it every year.

With a temperature between 18 and 20 degrees Celsius throughout the year, the site is considered very beneficial for health. Its salts are made of three minerals that give it its colors: white, because of sodium chloride, red, due to iron oxide, and pink, due to magnesium. The increase of energy, the regulation of pH levels (measuring acidity or alkalinity) of the blood, the reduction of fluid retention and even the rise of low blood pressure are some of the alleged virtues attributed to the so-called pink Himalayan salt, although these are very similar to those of the common one.

From a point of view of nutritional and chemical structure, there are few differences between one and the other, since, like the one that all know, the former is made up of 98 percent sodium chloride, and the rest are minerals, such as potassium, magnesium, calcium, which, although highly recommended from a medical perspective, are present in such few quantities that they have no effect on the proper functioning of the human body.

Used to prepare almost all types of food, from meat and fish to vegetables, its particular color also makes it very useful to decorate several dishes, while its stones are used in making various decorative items, such as lamps, jars, ashtrays and statues.