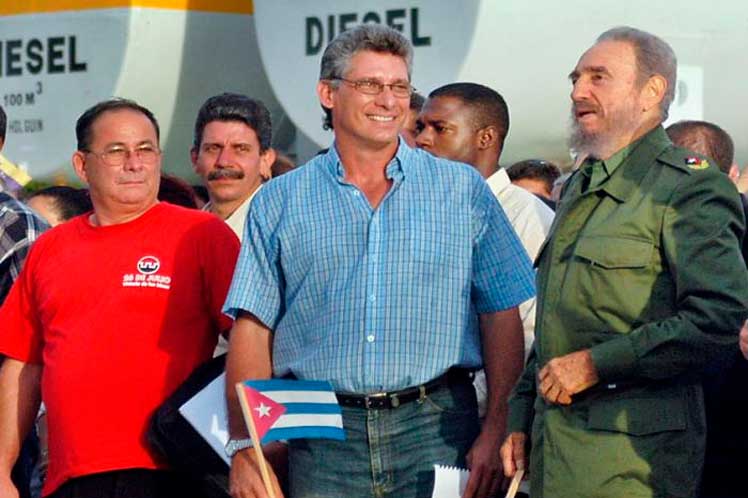 In his Twitter account, he recalled that Fidel Castro’s office in the Palace of the Revolution (headquarters of the executive) is preserved as he left it on his last day there.

I try to imagine him in the midst of the hard battles of so many challenging years. It inspires me. And I keep fighting. #FidelViveCubaSigue, Díaz-Canel wrote.

He also commented that the day before he was asked when he had met Fidel, and answered “since I can remember. Many years later he was my boss, but since I was a child I have known and loved him.” Now I try to follow his footsteps. I walk along with him, he said.

Emphasizing his influence among the population and his convening power, the Cuban leader recalled a mass event held in the city of Santa Clara in 1996, in which a call through the local radio was enough to fill the Ernesto Che Guevara Square with people, where the revolutionary commander delivered a speech.

It rained last night, as it rained that September 30, 1996 in Santa Clara. With just an announcement on the radio, the #Che Square was filled to hear #Fidel. I’m still shaken by the emotion of my people, Díaz-Canel tweeted.

The president also posted on his Twitter a phrase from Army General Raul Castro highlighting the transcendence of his brother of blood and struggles:

“Fidel is Fidel, we all know it well, Fidel is irreplaceable and the people will continue his work when he is no longer physically present. His ideas, which have made it possible to raise the bulwark of dignity and justice that our country represents, will always be there”.