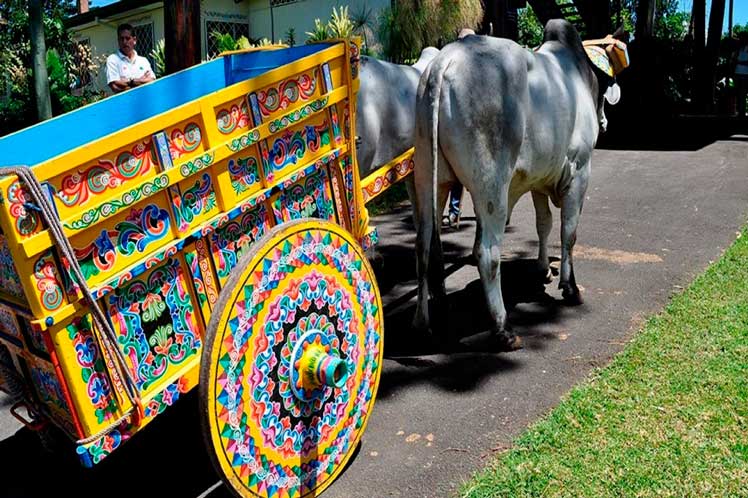 Declared as such on March 22, 1988 and as anOral and Intangible Heritage of Humanity Masterpiece on November 24, 2005 by the United Nations Educational, Scientific and Cultural Organization, these vehicles are closely linked with ‘boyeros’, men and animals that drive them.

The history of these wagons is lost in the mid-19th century, thanks to the increase inthe growing of coffeein mountainous areas, whose access was through muddy and steep roads during the months of the crop’s harvest.

Different local experts, based on writings of the time, agree that ox driversbroadly preferred the solid wood wheel, whose use was inspired by a device where Spaniards put the artillery cannon on (cureña).

Although it’s used in all Central American countries, it is only in Costa Rica where they are decorated in such a unique way and where, by decree issued on October 27, 1997, there is one day during the year -the last Sunday in November- that celebratesand promotes the First Entrance of Saints and Ox Drivers’ Parade.

The decree says that its objective is to spread and promote the “the ox driver’s tradition and the cart”, which is a symbol and reference of the cultural identity of Costa Ricans.

On that day, these men are accompanied by the typical masquerades that dance to the tune of ‘cimarronas’ and folkloric dance groups, in a journey that begins at Paseo Colón and winds up at Plaza de la Democracia, in San José. Supported by the capital’s Municipality, the parade is the beginning of the popular celebrations of the ‘josefinos’ for New Year’s Eve.

Former President Figueres is a candidate to Costa Rican Presidency

Former President Figueres is a candidate to Costa Rican Presidency