The Rittenhouse case Controversial verdict in the U.S. 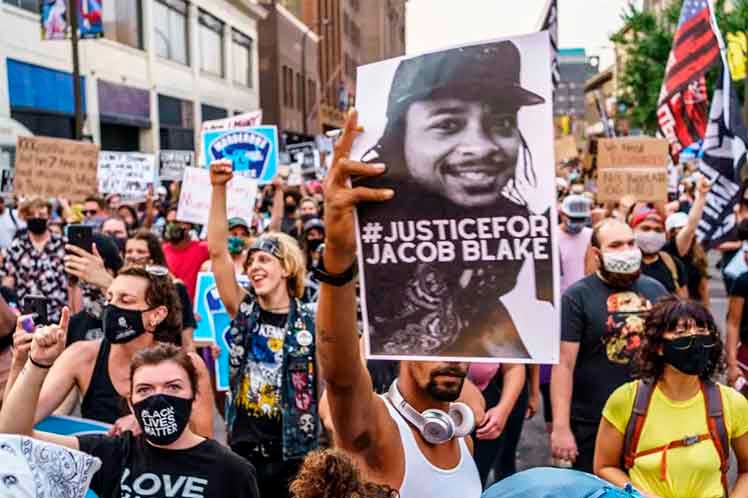 The Rittenhouse case Controversial verdict in the U.S.

La Habana, 28 nov (Prensa Latina) The verdict favoring the murderer of two protesters in Kenosha, Wisconsin, once again brings to public attention some of the issues that divide Americans most: racism, weapons and the role of the judicial system.

A week after learning about the acquittal of Kyle Rittenhouse, the young man who killed two people during the 2020 anti-racist protests, the case has repercussions and shakes an already tense and polarized political environment toward the 2022 midterm congressional elections.

After several days of debates, the 12-member jury found the teenager not guilty of all five charges he faced: two of homicide, one of attempted murder and two accusations of recklessly endangering safety.

They considered that the deadly shots fired at Joseph Rosenbaum, 36, and Anthony Huber, 26, were in self-defense, as was the attempted murder of GaigeGrosskreutz, who was also attacked by the defendant the night of August 25, but survived.

The now 18-year-old man was still under age when he pulled the trigger of an AR-15 semi-automatic rifle during demonstrations against racism and police brutality that occurred in Kenosha after two law enforcement officers shot African-American Jacob Blake, who was paralyzed from the waist down.

Following the verdict, there have been several reactions, from President Joe Biden, who admitted his “anger” and “concern” about the sentence and urged citizens to respect the resolution and express their views peacefully, to former President Donald Trump, who praised Rittenhouse and his right to self-defense.

In the same line as the former ruler, the decision was hailed by conservatives, even Republican representatives Madison Cawthorn and Matt Gaetz offered the young man an internship in Congress, and the organization Gun Owners of America announced the donation of an AR-15 rifle to the man who had recently been found innocent.

On the other side are those who think that it is outrageous that the U.S. justice system once again protected a racist killer, as nascar driver Bubba Wallace commented that Rittenhouse would have been sentenced to life if he were black.

Relatives of one of those shot said in a statement that the verdict sends the unacceptable message that armed civilians can show up in any town, encourage violence and then use the threat created as an excuse for shooting people on the streets.

Gun control groups and civil rights activists warned that the trial’s result could unleash an outbreak of patrolling by individuals who decide to take their vision of justice in their own hands and do their will violently, potentially causinganarchy and threatening the First Amendment right to protest.

This case, revealing the fractures in American society, also represents, according to analysts, extending impunity not only to those who murder people of African descent, but even to those who attack white people – as were the three victims mentioned above – who raise their voices to end institutional racism existing in the self-proclaimed “greatest democracy in the world”.