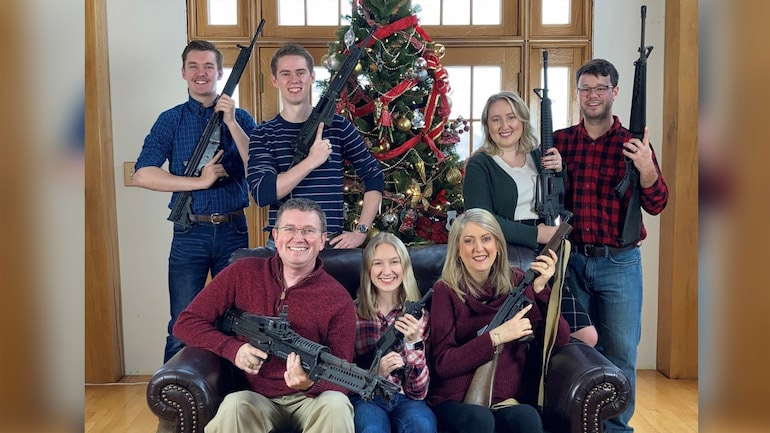 Washington, Dec 6 (Prensa Latina) Days after a shooting incident at a Michigan school left four students dead and reignited the debate over gun laws in the US, a photo of a GOP member and his family posing with rifles for their Christmas greetings card has gone viral and triggered a backlash online.
Share on facebook
Share on twitter
Share on whatsapp
Share on telegram
Share on email

The massacre by 15-year-old Ethan Crumbley – the worst reported in the United States since 2018 – left four students dead and at least seven seriously injured, including a teacher.

The event prompted a quick response from another congressman, Democrat John Yarmuth, who tweeted: “not everyone in Kentucky is an insensitive jerk.”

Fred Guttenberg posted on Twitter that if Massie decided to share photos holding guns, he would leave him to see the last of his daughter alive and where she was buried for being one of the 17 fatalities three years ago in Parkland shooting.

In statements to CNN, Manuel Oliver, whose son also died in that shooting, said on Saturday that Massie’s tweet is “in the worst taste” and it is something that should “teach us who we should choose and who not.”

Crumbley’s parents were charged with manslaughter after giving the boy as an early Christmas present a Sig Sauer 9mm semi-automatic pistol he called as his “new beauty.”

The day before the massacre, as a teacher reported the young man had been seen searching for ammo online, his mother did not seem alarmed and, instead, texted him assuring she was not angry. “You have to learn not to be discovered,” she stressed.

The right to bear arms in the United States is protected in the Second Amendment of the US Constitution, and groups such as the powerful National Rifle Association (NRA) openly oppose any measure that may lead to its control.