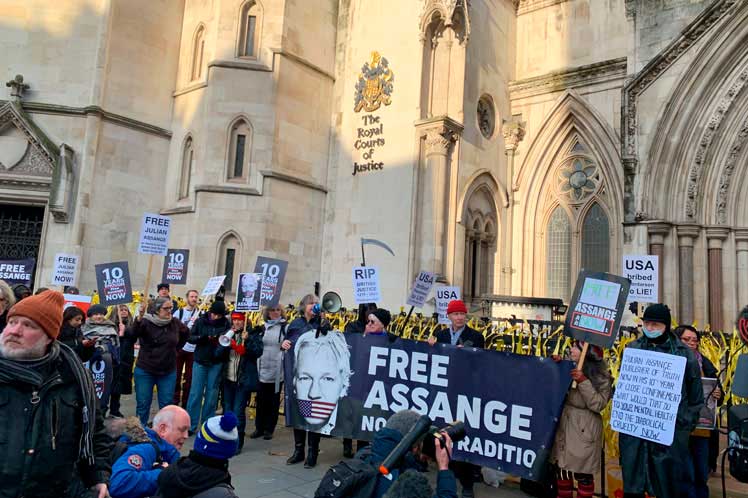 The decision, described as an “abortion of justice” by life partner of the Australian journalist, Stella Moris, implies that Assange will remain in the maximum security prison of Belmarsh until the conclusion of the new appeal that his defense lawyers will present shortly before the British Supreme Court.

In this regard, director of the Campaign against the Extradition of Assange, John Rees, assured Prensa Latina outside the court that his lawyers will insist again to get his release on bail so he can at least attend the rest of the trial in freedom.

Actually, they should let him out (of jail) because what is happening now is that Assange is being punished, despite not having committed any crime in this country, he said.

The WikiLeaks founder has been in jail since the Ecuadorian government handed him over to British authorities in April 2019 and was sentenced to 50 weeks in prison for violating a bail imposed seven years earlier, but after serving his sentence, British courts decided that he should remain in prison until the extradition process is complete.

The United States wants the extradition of Assange for broadcasting files on WikiLeaks that expose war crimes committed by the US military in Iraq and Afghanistan, and thousands of cables with secrets of US diplomacy.

Last January, Judge Vanessa Baraitser opposed the extradition because psychiatric experts who testified in court assured that the 50-year-old cyber- activist could commit suicide in a US jail.

US prosecutors contested the decision, and at the appeal hearing held last October they assured the High Court that Assange will not be subjected to any extreme prison regime at being tried and convicted in the United States, something that Moris denounced they will never comply with.

After announcing their acceptance of the US prosecutor’s appeal, judges sent the case back to the trial court, with the instruction that Judge Baraitser refer it to Interior Minister, Priti Patel, who will have the last word on the extradition case.

The British Supreme Court of Justice has, for its part, the power to accept or decline appeals.

If the extradition request is successful, Assange could be sentenced to a total of 175 years in prison, based on 17 criminal charges against him, which are related to alleged violations of US espionage law.