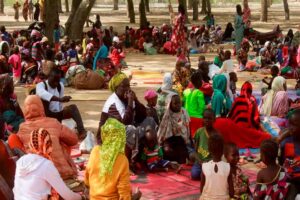 A flare-up in intercommunal fighting in northern Cameroon has forced over 30,000 people to flee their homes and brought a halt to aid operations there, the UN refugee agency, UNHCR, said on Friday.

The development is just the latest episode in the difficult relationship between the region´s herders, fishermen and farmers, who have seen the waters and tributaries of Lake Chad shrink dramatically, because of climate change-induced drought.

In Geneva, UNHCR spokesperson Boris Cheshirkov explained that clashes had broken out in recent days in the village of Ouloumsa, following a dispute over dwindling water resources.

The violence then spread to neighboring villages, leaving 10 villages burned to the ground.

Since Sunday, December 5, at least 22 people have been killed and 30 others seriously injured during several days of ongoing fighting.

Fighting then erupted three days later, on Dec. 8, in the Cameroonian city of Kousseri, a commercial hub with 200,000 inhabitants, according to UNHCR.

In addition to the destruction of the cattle market, Mr. Cheshirkov noted that “at least 10,000 people fled Kousseri to Chad´s capital, N’djamena, located a few kilometers across the Chari and Logone rivers, which mark the border with Cameroon.

The UNHCR official noted that fully eight in 10 of the new arrivals were women – many of whom are pregnant – and children.

The UN agency also welcomed Chad’s hospitality towards the new arrivals, even though it is already home to close to a million refugees and internally displaced people.

In partnership with the authorities, Mr. Cheshirkov said that UN agencies and partners were rushing to support the Cameroonian refugees with emergency shelter and assistance.

In Cameroon´s Far North, although security forces have been dispatched to the affected areas, the UNHCR spokesperson noted that the situation remained volatile, forcing UNHCR to suspend its operations there.

UNHCR warns about impact of pandemic on migrants

UNHCR calls for end of forcible returns of Afghan migrants

UNHCR warns about impact of pandemic on migrants

UNHCR calls for end of forcible returns of Afghan migrants