Cuba highlights its first year along with Eurasian Economic Union 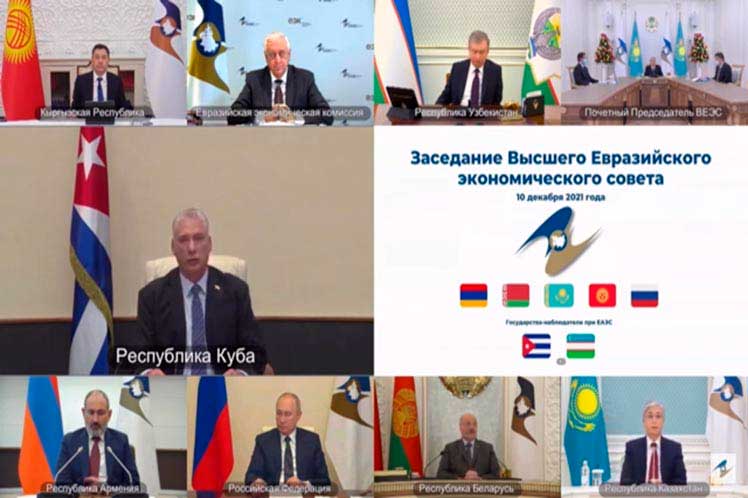 Cuba highlights its first year along with Eurasian Economic Union

Addressing the meeting organized by videoconference from this city, the president noted that in this year, his country took steps to move towards a mutually beneficial relationship with the nations that make up the bloc, based on respect, trust and collaboration.

Led by Kazakhstan’s President Kassym-Jomart Tokayev, who is interim president of the EAEU, the heads of State or Government of the Union member countries: Russia, Belarus, Armenia and Kyrgyzstan, as well as Uzbekistan, which, like Cuba, have observer status, are attending the event.

Diaz-Canel said that since the last meeting held in October, Cuba accompanied the different events organized by the actors of the Union, among them the session of the Intergovernmental Commission in Yerevan, Armenia; and the meetings among Heads of Customs on collaboration, exchange of information and mutual assistance.

He considered encouraging the country’s exchanges with the Gamaleya National Research Center for Epidemiology and Microbiology and the Russian Direct Investment Fund, to carry out studies to allow combining the Cuban and Russian vaccines to fight the coronavirus that causes Covid-19.

At the same time, he highlighted the participation of representatives from Armenia, Belarus, Kazakhstan and Russia in the 2nd edition of Cuba 2021 Business Forum, in which 2,300 businessmen from 86 countries, 23 chambers of commerce and 41 promotion agencies participated.

The Cuban head of State announced the visit to Havana in coming days of Sergey Glaziev, Minister in charge of Integration and Macroeconomics of the Eurasian Economic Commission, and the holding of the 2nd session of the Joint Commission.

He stated that the Joint Collaboration Plan for the 2021-2025 period, which includes more than 30 actions in sectors such as economy, trade, finance, health, biotechnology, agro-industry, culture, sports and communications, will be signed during that visit.

The Supreme Eurasian Economic Council is the governing body of the Union in charge of articulating the strategy, course and progress of the integration process of the bloc founded in 2015. Its objective is to promote the free movement of goods, services, capital and labor.