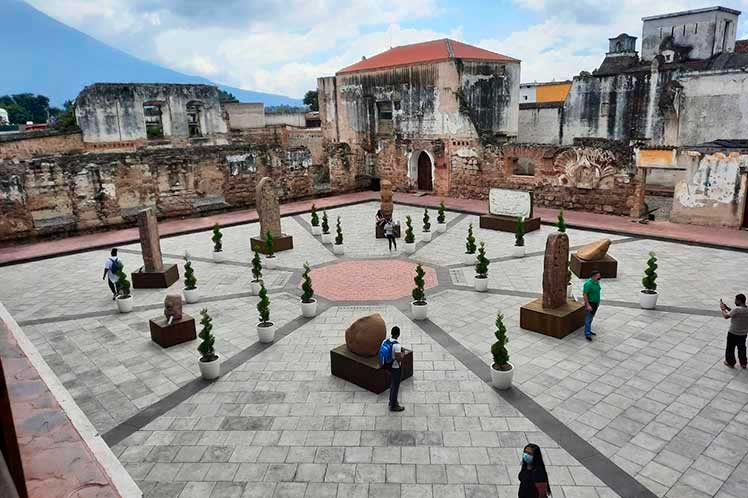 A World Cultural Heritage Site since 1979, the building couldn’t be a better site to include in 842 square meters more than 90 master pieces of the Pre-Hispanic, Colonial and Republican eras.

Many of the gems were abandoned or kept in storage facilities of other museums and, even, brought from abroad, Culture and Sports Minister, Felipe Aguilar, said when cutting the ribbon on its first stage, on September 10, 2021.

Headquarters of the Captain-Generals’ Office of the Kingdom of Guatemala, the also known as Royal Palace adds its colonial values to the project, that is why, it preserves its original structure and removable frames that split different spaces.

Pre-Hispanic art objects that stand out include the lintel II of the Temple III of the Tikal National Park, located in Flores, Petén, as well as burial offerings to the K’utz Chman King from the Tak’alik Ab’aj Archeological Park in El Asintal, Retalhuleu. The latter is considered the most important Mayan civilization finding and the oldest found up to the present times in Central America, an event that is not ignored by stories written to give details of the pieces.

Visitors can also see in the tour of its seven rooms the Ecce Homo painting, one of the greatest works of art by artist Tomás de Merlo, and the pieces Cena Eucarística (Eucharistic Supper) by Cristóbal de Villalpando, and El Cristo de los Ángeles (The Christ of los Ángeles) by Juan José Rosales.

The two national colonial art pieces were restored by expert conservationists from the Anthropology and History Institute at the Central American nation.

The walls of the Captain-Generals Palace also safeguard the first sketches of the National Coat of Arms by artist Juan Bautista Frener, with its ‘monas’ and original laurel leaves.

To enrich the experience, the facility has high-tech equipment, such as audio-guides in English, French, German and Mayan languages. In addition, it has advanced security systems to protect its valuable treasures.

The second constructive stage began early this month, which will wind up in March, 2022, and add another 10 exhibition areas with a showcase of the Contemporary and Modern periods.

Another attraction added to Antigua, an iconic site for international tourism that will now invite visitors to discover more of the past and present of the land of the Quetzal.