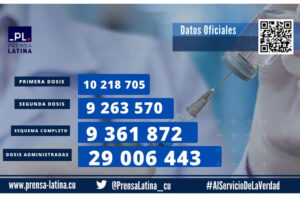 According to the National Director of Epidemiology, Dr. Francisco Duran, recent projections from the Pan-American Health Organization (PAHO) suggest that Cuba will lead in the region with complete immunization schemes per 100 inhabitants.

According to the Ministry of Public Health of Cuba (MINSAP), on December 11, 83.7 percent of the population (9,361,872 people) is in that condition, a figure that places Cuba as the first country in Latin America and second globally, only surpassed by the United Arab Emirates.

The international data are also supported by statistics collected on the website of Oxford University, Our World in Data, which also reflects that Cuba surpassed Chile, Uruguay and Brazil in the region.

On the other hand, Cuba also ranks first in the number of doses of Covid-19 vaccines administered per 100 inhabitants with an average of 255.89.

Another aspect reflected by Our World in Data in which the number one corresponds to Cuba is the total number of doses administered (29,600,443), according to its population, as part of the initial protocol or as a reinforcement.

Regarding the reinforcement, 685,324 people have already received the booster, including 69,994 as part of a clinical study and 615,380 from selected territories and risk groups.

According to the MINSAP, 10,218,705 citizens have at least one dose of the Cuban vaccines Soberana 02, Soberana Plus or Abdala, a figure that includes convalescents from the disease who are administered a single dose of Soberana Plus.

Cuba was also the first nation in the world to initiate a mass campaign in children over two years of age, and currently more than 1.6 million children have received the complete vaccine scheme against Covid-19.