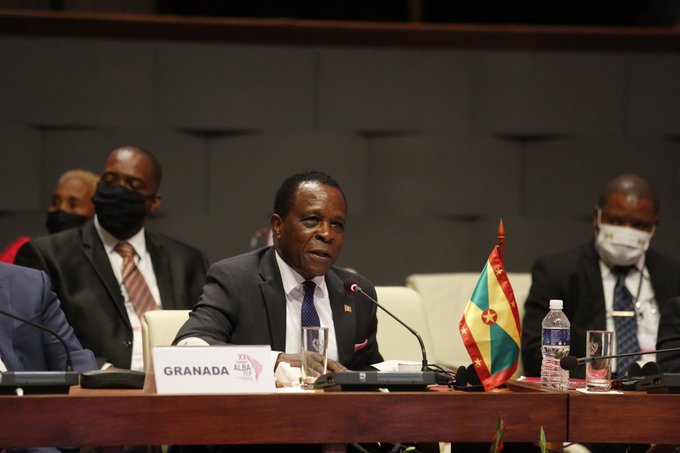 During his speech at the event, held at the Palace of the Revolution in this capital, he said the countries of the bloc must work together to achieve the economic benefits they deserve.

As a group we have different priorities to consider, including climate change, the 2030 sustainable development agenda, South-South cooperation, women’s economic growth and a peaceful society for all, Mitchell insisted.

The head of Government thanked Cuba and Venezuela for the help received in his country during the Covid-19 pandemic.

“You showed solidarity despite the problems, which is cause for praise,” he remarked.

The Prime Minister, in charge of National Security, Youth Development, Public Administration and Information matters, among others, called for the investment of additional resources to face the economic impact of the crisis caused by the pandemic.

Grenada considers equality a key pillar, he said, adding that it is imperative to work even harder to reduce poverty.

He also assured that his nation is aware of the benefits of the ALBA-TCP actions in favor of the member countries.

“Nothing can allow us to divide for whatever reasons. We have to be guided by the united approach,” he said.

Mitchell also advocated for protecting biodiversity and fragile ecosystems, developing trade between countries in the area, as well as the production of new goods and services.

“We urge to lift the economic, commercial and financial blockade of the United States against Cuba,” he stressed.

In the same way, he emphasized that the designation of the largest of the Antilles as a state sponsor of terrorism by the northern nation is contradictory, when the host country of the event has always provided its help in the sectors of education, culture, and social services.

This 20th Summit will study the creation of joint strategies to face the post-pandemic stage, define actions in order to guarantee peace and stability in the area and redouble political agreement to confront the interference and hostile policies of the United States.

The regional mechanism is made up of 10 Latin American and Caribbean countries: Cuba, Venezuela, Bolivia, Nicaragua, Dominica, Saint Vincent and the Grenadines, Antigua and Barbuda, Saint Kitts and Nevis, Saint Lucia and Grenada.