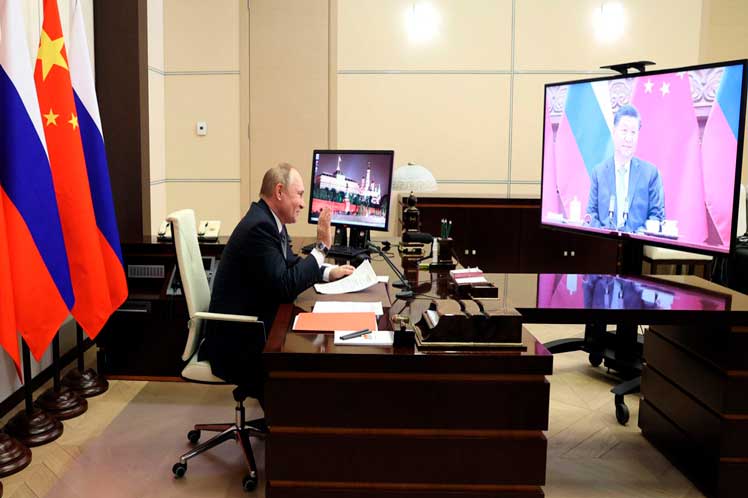 At the beginning of the talks, Putin stressed that the link will allow them to discuss in depth the development of bilateral relations, comprehensive partnership and strategic interaction.

“Despite the continuing health and epidemic restrictions, we remain in constant contact,” he said, according to the Kremlin’s official website.

Putin stressed that China and Russia held a videoconference in June on occasion of the 20th anniversary of the signing of the Treaty of Good-Neighborliness and Friendly Cooperation, whose validity “extends for a new period of five years” and that allowed to bring bilateral relations to an unprecedented level.

He also stated during this time he also spoke by phone with his Chinese counterpart regarding “acute issues” linked to international developments; in particular, the Afghan problem.

“A new model of cooperation has been formed between our countries based, among other things, on foundations such as non-interference in internal affairs, respect for the interests of each one, and the determination to turn the common border into a belt of eternal peace and good neighborliness,” Putin said.

The President of Russia also stated that bilateral trade increased 31 percent, up to 123 billion dollars, during this year, exceeding the pre-pandemic record of 2019.

He also pointed out that both countries are making progress in the implementation of several large-scale projects in the energy sector, including nuclear energy, industry and high technology.

Vietnam and China for good neighborliness and cooperation

Vietnam and China for good neighborliness and cooperation