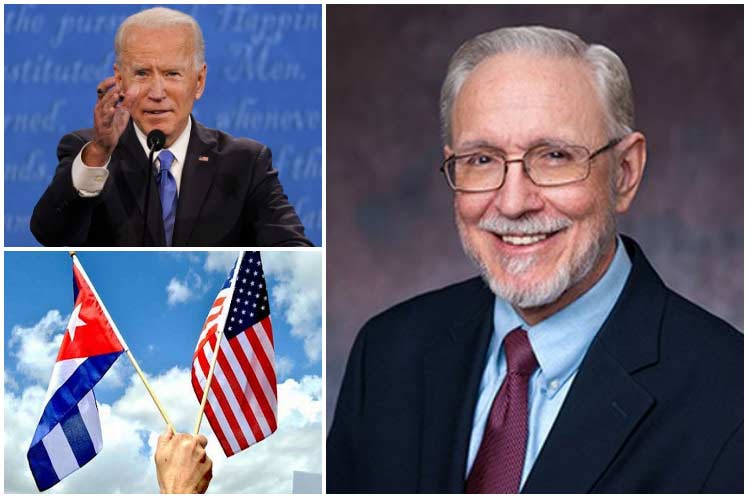 Washington, Dec 16 (Prensa Latina) US academic William Leo Grande on Thursday urged President Joe Biden to keep his campaign promises on changes over policy towards Cuba and also to step back from that of Donald Trump.

Most Democrats really long for a sensible policy towards Cuba, not repeating Trump’s, the government professor at the American University School of Public Affairs posted on Twitter.

Co-author, alongside Peter Kornbluh, of the book “Back Channel to Cuba: The Hidden History of Negotiations between Washington and Havana”, Leo Grande asked both President Biden and State Secretary Antony Blinken to “take note” of this.

On Thursday 114 Congress Democrats sent a letter to Joe Biden calling for him to take a different policy towards Cuba, which gives priority, above all, to the Cuban people´s welfare.

The letter, backed by the heads of 18 committees of the House of Representatives, asked President Biden to draw up his own strategy regarding Cuba and to step back from that of Donald Trump, who under his presidential term (2017-2021) tightened the unjust and genocide blockade after imposing 243 new measures still in force.

On June 28, Leo Grande published an article in The Hill newspaper claiming the vote of the United States at the UN General Assembly (UNGA) against the resolution calling for the lifting of this unilateral blockade is a real example of Joe Biden’s unwillingness to walk away from Trump’s Cuba policy.

The first signal was his administration’s decision to reaffirm, with no real evidence, Trump’s determination that Cuba is not supporting the United States’ counter-terrorism efforts, he stressed.

But the reason why President Biden did not commit to Cuba afresh, despite expressing he would do it during his presidential campaign, is fear of Florida, Leo Grande stressed.

“Democrats continue suffering from electoral post-traumatic stress disorder since Al Gore lost the presidency to George W. Bush by 537 votes, a loss in which Cuba was core issue and the Cuban-Americans played a key role.” He said.

Leo Grande recalled that Joe Biden’s campaign strategy in Florida in 2020 was to say as little as possible about Cuba because nothing he could raise would help him to win votes, while anything he said would make him lose some.

The election outcome was a real debacle that exacerbated fears about Florida’s preponderant place in winning votes for the 2022 midterm elections. That´s why lengthy review of the Joe Biden administration’s Cuba policy suggests the White House does not know how to handle the political risks of this issue, he added.