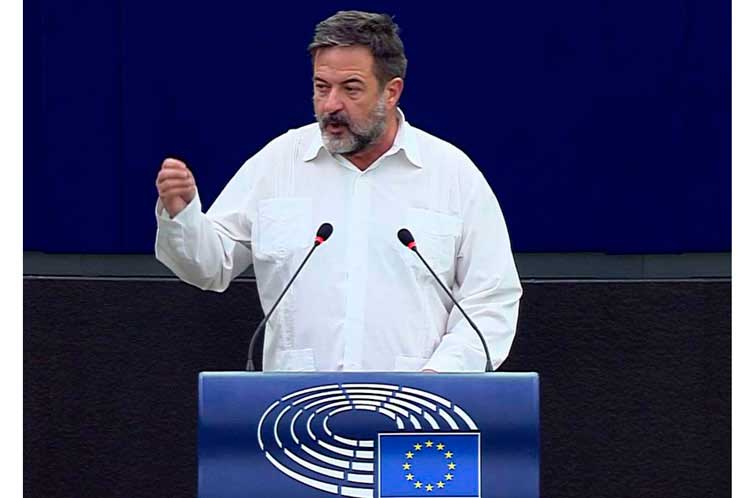 “The only human rights violation that Cuba has suffered is more than 60 years of a criminal blockade imposed by the United States, and you do not even mention it,” he said at a plenary session of the European Parliament, forced for the third time in recent months to “examine” Cuba at the initiative of right-wing parliamentarians.

The member of the Left-wing Group (GUE/NGL) called on the promoters of the new text gifted students of Joseph Goebbels (Nazi Propaganda Minister), because they repeat the same lie one thousand times hoping that they consider it true.

In Cuba there is no arbitrary detention, no torture, and no disappearances. Those who are in jail have committed crimes, as in any rule of law, he stressed in his disqualification of the criteria set forth by MEPs such as Leopoldo Lopez (European People’s Party).

Pineda stressed that in Cuba there is a Revolution that puts the human being at the center of political, social and economic actions, without commercializing rights, “as done in this part of the world.”

This makes Cuba an example of respect for human rights, with the lowest infant mortality rate in Latin America, a country where there are no children sleeping on the streets or dying of hunger, which with its own vaccines already protected 90 percent of the population, the first in the Americas and the second in the world, he stated.

“Far from what their bosses (the United States) forced them to say, Cuba has a participatory democracy, with deep roots, in which citizens propose different candidates, and in free and secret voting elect their representatives, who every year are accountable and whom they can revoke,” he said.

The MEP insisted at the plenary of the European Parliament on the servile position of the promoters of the resolution, and assured that in Cuba they know well what they are facing.

“That people know what it is to be the Yankees’ casino, and now that they have their sovereignty and independence in their hands, they will continue to defend the cry of Homeland or Death, We will overcome! And they will do it Until Victory Forever,” he added.