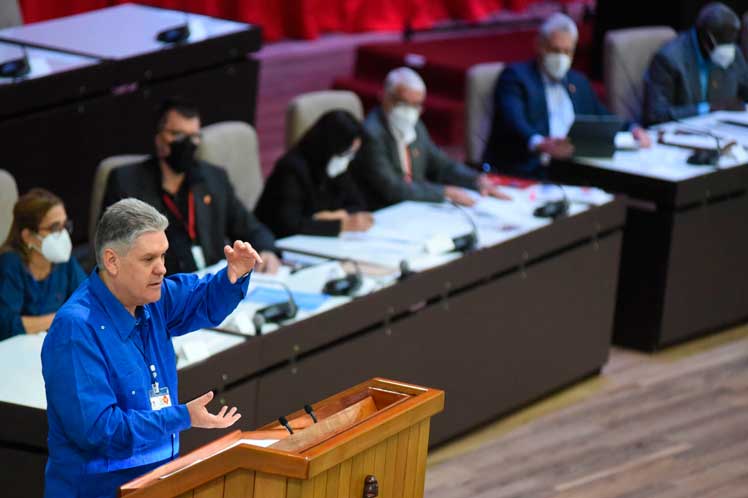 Deputy Prime Minister Alejandro Gil explained to representatives of the Economic Affairs Commission of the National Assembly (parliament) that the forecast is to end the year with a 2-percent growth in the Gross Domestic Product (GDP), after maintaining three quarters of 2021 with a positive balance, following seven consecutive quarters of contraction.

In the presence of the Cuban head of State, Miguel Diaz-Canel, and National Assembly President Esteban Lazo, Gil, who is also the minister of Economy and Planning, noted that despite this encouraging news, the country must address relevant issues like more than 500 state companies with deficits.

He also mentioned the partial dollarization of the economy in relations among companies, and between firms and the non-state sector, as it is something not foreseen in any economic design and has an impact on retail prices by forcing the acquisition of foreign currency in the informal market, the minister explained.

Gil described as a challenge the correction of deviations from what was proposed by the ‘Ordering Task’ which unified the currencies and established its exchange rate at 24 pesos per US dollar, in addition to a price and salary reform.

In particular, the minister referred to retail inflation, which is not Cuba’s exclusive problem, since at a global level it is experienced as a consequence of the increase in the price of fuel, the breakdown of logistics chains and the supply deficit, in addition to the impact of Covid-19.

By the end of November, Cuba had accumulated an inflation of 69.5 percent, nearly 10 points higher than expected at the beginning of the year (60 percent), and which shows concretely in the decrease in the population’s purchasing power.

The response to this cannot be raising wages as it would worsen the situation, the solution is to increase the supply, but with domestic products, because the country does not have the capacity to import, the deputy prime minister explained.

It is up to us to work harder, because it is also necessary to fight speculation, resale and indiscipline, he added.

Gil recalled that inflation is not generalized, since there are prices of basic goods and services that have not gone up since the beginning of the year due to state protection.

Among then, he mentioned electricity, water, gas, the retail sales of fuel, and subsidized basic commodities, despite the increase in several of these lines in the international market.