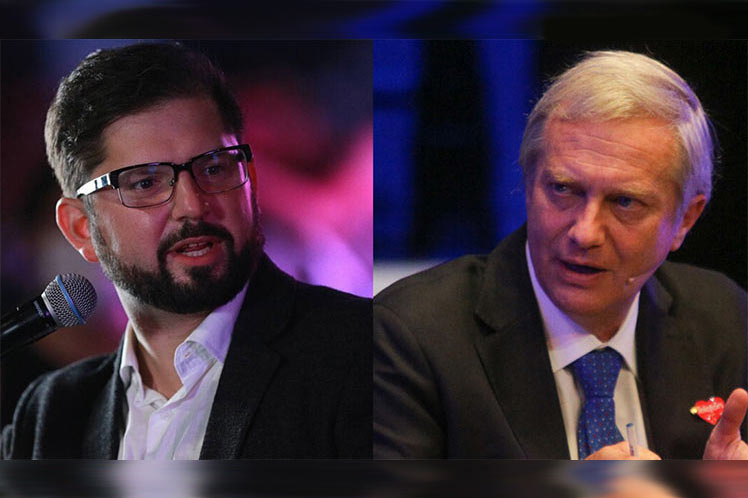 Boric, 35, is the youngest candidate for the Palacio de La Moneda, achieved notoriety during the great student demonstrations of 2011 to demand free, free and quality education, and is currently a deputy for the Magallanes Region and the Chilean Antarctic.

Kast, a lawyer of German origin, already ran for president in 2017 and is a defender of the legacy of the Augusto Pinochet dictatorship (1973-1990).

In the elections of November 21, Kast obtained first place, with just two points of difference over the rival, but the polls published here after the first round give Boric as the favorite for the ballot.

“I think it will be a very narrow election, however, in recent days we have a more optimistic perception that Boric could win,” the director of the newspaper El Siglo, Hugo Guzmán, said in an interview with Prensa Latina.

Guzmán added that during the campaign there was a very intense territorial deployment in his favor, with massive activities in support of his candidacy and the world of arts, culture, science, education, the student, labor and feminist sector mobilized to support it.

“Here two country options are at stake,” said the political analyst, also, and explained that with Boric there is the possibility of moving towards a new Constitution that leaves behind the one in force since the time of the dictatorship, and towards a State that guarantee social rights, such as education, health and sexual diversity.

On the other hand, Kast represents regression, the possibility that there will not be a new magna carta, a fragility in the matter of human rights and the installation of retarding and repressive public policies, he affirmed.

Guzmán also referred to the lies propagated by the extreme right to try to discredit the candidate of Approve Dignity, both in the debates on radio and television and on social networks.

“In Chile the extreme right uses false news, half-truths, media terrorism, distorting communications and the alteration of reality to impose a message that has an effect on sectors of society,” he denounced.

According to the analyst, this is a phenomenon that not only occurs here, but also in other Latin American countries such as Brazil, Paraguay, Argentina and Mexico.

The elections arouse international interest and in recent days personalities such as the Nobel Peace Prize winner Adolfo Pérez Esquivel or the mayor of Paris, Anne Hidalgo, spoke on the subject.

“I think that, particularly because of our history, there is a lot of attention that we do not go back to an ultra-right regime, a representative of Pinochetism,” Guzmán commented.

In his opinion, there is also hope in a progressive model that is incorporated into alliances with the other leftist governments of the continent and that can contribute with a democratizing perspective and social rights at the level of Latin America.

Today in the region we have challenges such as the fight against poverty, access to food, drinking water, the fight against the Covid-19 pandemic, the housing deficit, a more equitable trade, and in that we could contribute if it succeeds the alliance I Approve Dignity, he assured.