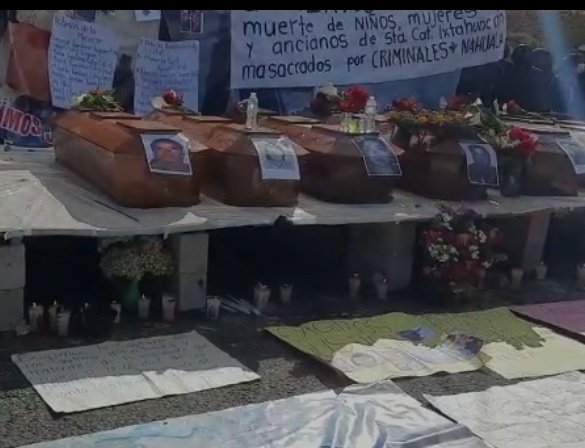 This Monday, residents of Santa Catarina Ixtahuacán blocked kilometer 170 of the busy Inter-American Route to demand justice for the 13 victims of the most recent confrontation, all residents of their village, according to the National Civil Police (PNC).

Jorge Chinchilla, spokesman for the institution, confirmed that there are already agents at the place of the demonstration to start a dialogue and try to free the way.

The PNC reported yesterday the capture of three alleged participants in the massacre last Friday, when 13 people lost their lives, including a policeman and four minors, who were ambushed and then burned in the truck in which they were traveling to collect their crops. .

Those named are at the Quetzaltenango Regional Justice Center, after the seizure yesterday of an assault rifle, several useful hoppers and three cell phones in the transport in which they were traveling.

The Finca El Alto, a land of 24 caballerias that borders between Santa Catarina Ixtahuacán and Nahualá, Sololá, is the origin of the historical dispute between both communities.

Ancestral authorities of Santa Catarina say that they possess the communal property title to this land, apparently registered in the Property Registry in 1923, and demand that the State and its neighbors respect that portion of the land.

In October 2020, the High Level Negotiating Commission, chaired by Vice President Guillermo Castillo, began an agrological and measurement study on this farm, with the hope of ending the core conflict between the two communities.

In August this year, President Alejandro Giammattei involved the Interior Ministry in the process, but without any progress.

The results of the study are not yet known and each year the disputes add more victims and mourning to the families, now even minors are involved.

On this occasion, the Human Rights Ombudsman, Jordán Rodas, asked the Executive “top priority to the serious security situation in the area, as there are indications that the most recent armed attacks exceeded the historic border conflict.”

The indigenous mayor of Ixtahuacán requested the same position because “if the agreements of the dialogue table are not going to be given for political reasons, other alternatives are sought.”

In the last hours, the presence of the PNC increased in the area as a means of containment, the same strategy tried by successive administrations without reaching a just and lasting solution.

Neither did the States of Exception, the last one on May 30, managed to put a stop to the violence.