Gabriel Boric and his challenges 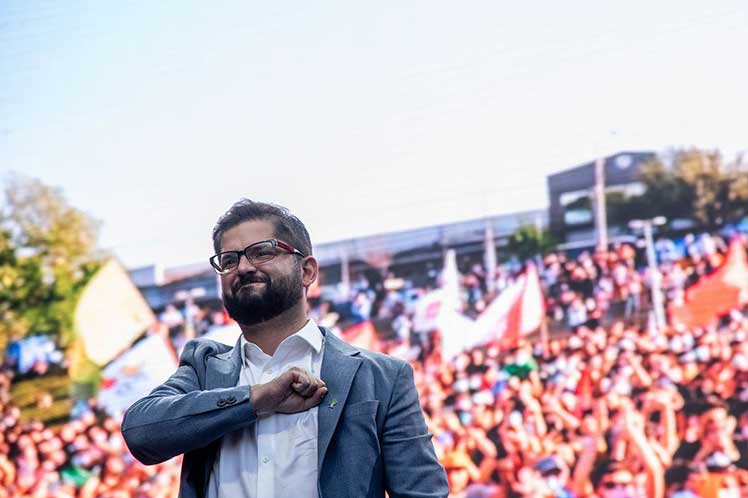 Gabriel Boric and his challenges

The standard-bearer of the left-wing coalition I Approve Dignity won the elections this Sunday with 55.87 percent of the votes, an advantage of 11.74 points over his rival, the far-right José Antonio Kast, of the Christian Social Front.

At the age of 35, Boric became the youngest elected president in Chile and also the most voted, with 4.6 million votes, above the four million obtained in 1993 by Eduardo Frei.

The Chilean deputy prevailed in 11 of the 16 regions of the country: Arica and Parinacota, Antofagasta, Atacama, Coquimbo, Valparaíso, Metropolitana, O’Higgins, Los Ríos, Los Lagos, Aysén, Magallanes and the Chilean Antarctic.

In his first speech to the nation, he recognized that the times to come are not easy because the consequences of the Covid-19 pandemic must be faced and the causes of the social outbreak still in force must be addressed.

On October 18, 2019, a movement began in this capital, driven by students, against the increase in the subway rate, which later spread throughout the country and demonstrated the discontent of the population with social inequalities and the neoliberal model.

The protests were violently repressed by the Carabineros and military forces, with a balance of about 30 dead, thousands of injured and 460 people with eye damage as a result of the firing of pellets or tear gas canisters.

One of the main demands of the protesters was to change the current Constitution, inherited from the time of the Augusto Pinochet dictatorship (1973-1990), and to strengthen the role of the State in the provision of basic services.

Installed on July 4 after the election by popular vote of its 155 members, including 17 from original communities, the Constitutional Convention is currently drafting the new fundamental law, which must enter into force next year after being submitted to a referendum. .

Before a crowd gathered in the center of Santiago, Boric promised to defend the constituent process, a reason for pride – he said – because for the first time a Magna Carta is being written in a democratic and equal manner, and with the participation of indigenous peoples.

The president-elect reiterated that his government program foresees advancing responsibly in the necessary transformations for the country, without leaving anyone behind.

Other objectives of his administration will be to strengthen the role of the State, reform the current pension system, increase the minimum wage, reduce working hours, increase taxes on the richest and achieve a better redistribution of wealth.

Questioned by the digital newspaper El Mostrador, Fernando Carmona, Boric’s economic advisor, declared that the government’s program will be the same one presented for the second electoral round.

Together with the teams of former presidential candidates Marco Enríquez-Ominami and Yasna Provoste, four commitments were defined in matters such as education, health, taxation and economic reactivation, although that does not necessarily imply that they will start all together, he pointed out.

Carmona assured that the government will not ignore the role played by the Central Bank, nor the important objective of keeping inflation low.

The economic reactivation plan will influence both the public and private sectors and emphasizes the improvement of small and medium-sized enterprises and the creation of jobs for women.

Progress in the transformations involves reaching agreements with other sectors for the approval of laws in a Congress with a wide range of political forces.