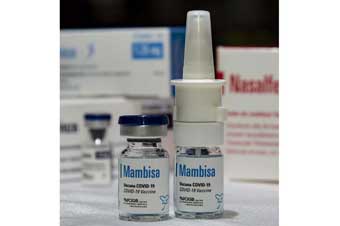 “Final evaluations are being carried out and work is being done to complete the development of the Mambisa vaccine,” wrote the president of the Cuban Biotechnology and Pharmaceutical Industries Group, Eduardo Martínez on the social network Twitter.

“We think that it can help prevent the transmission of SARS-CoV-2 and provide a certain level of sterilizing immunity,” Martinez stressed.

Another message on the network of networks emphasizes that “the vaccine candidate Mambisa from the Center for Genetic Engineering and Biotechnology of Cuba, which is administered via the nasal route, has shown in clinical studies the induction of a high mucosal immune response against SARS-CoV -2. It could be very effective against transmission. “

According to Martínez, the existing Covid-19 vaccines, including the Cuban ones, protect very well against symptomatic disease, severe forms and death, but they are not sufficiently effective to prevent infection, so people can become infected even when vaccinated, and transmission cannot be cut.

That is why the international scientific community is working on how to achieve a vaccine that allows sterilizing immunity, he explained.

One of the ways, he added, is through an intranasal vaccine, that is, using the mucosal route to induce the response through which the virus enters the body.

That could very quickly neutralize it at the entrance itself without allowing it to replicate, he explained.