A Natural Treasure in North America 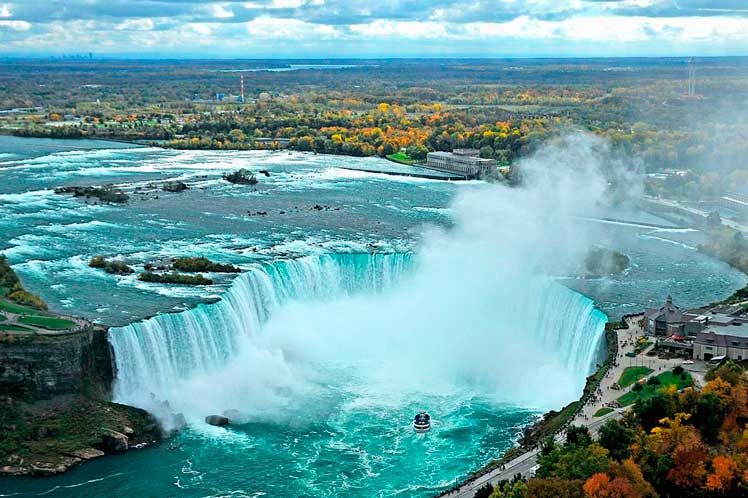 A Natural Treasure in North America

La Habana, 28 dec (Prensa Latina) Niagara Falls are a complex of cascades in the namesake river, in the northeastern region of North America, in Canada and the United States, some 236 meters above sea level, with a fall of nearly 51 meters.

Its original name comes from an Iroquoian word that means “water thunder”. The area’s inhabitants were called “ongiara”, a tribe known as “the neutrals” by French rulers, who found from them help as mediators in disputes with other native groups.

This natural monument is formed by three falls: Horseshoe Falls, American Falls and Bridal Veil Falls, the smallest one.

The Canadian one is famous for being more interesting than those in the U.S. because it provides better panoramic views and the best hotel facilities and leisure services. Its main attractions include boat tours, visiting the viewpoints –both day and night, since they look differently- the Skylon Tower, Clifton Hill and helicopter rides.

In addition, Queen Victoria Park stands out for its floral arrangements made with roses and daffodils that decorate the lawn. Concerning the area’s fauna, at the Bird Kingdom, one of the world’s largest aviaries, there are some 350 bird species from all over.

The region’s population nicknames it Las Vegas, due to its large number of hotels, casinos, shopping centers and sites to eat. Wine drinking also stands out.

Hearing the thunderous sound of water falling and watching how the misty clouds rise until the sky is tempting for many.

After the 1953 premiere of Niagara, a film starred by Marilyn Monroe, the number of visitors to the place abruptly increased.

Besides that, this picturesque landscape was part of the shooting of movies, such as Bride of Chucky, Pirates of the Caribbean, Camille and Luv.

According to TripAdvisor, with international tourism growth before Covid-19 annual visits therestood at over 14 million in 2019. Despite measures to curb the pandemic’s spread, this spectacular tour destination is not close and the public can watch its beauty from the viewpoints on both sides of the border between the United States and Canada.

Colombian indigenous people have nothing to celebrate

Russia and Latin America must overcome their mutual ignorance

Colombian indigenous people have nothing to celebrate

Russia and Latin America must overcome their mutual ignorance